“We need all hands, all Nigerian hands on deck to restore Nigeria, and that is what Governor Wike is saying to me. I wish Governor Wike well.” 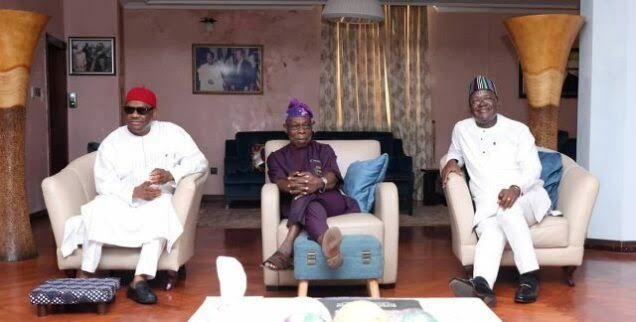 Governor Nyesom Wike of Rivers paid a visit to former President Olusegun Obasanjo in Abeokuta on Monday to consult and solicit his support for his presidential ambition in 2023.

He was accompanied by Governor Seyi Makinde of Oyo and Governor Samuel Ortom of Benue.

Mr Wike told journalists after a closed-door meeting with Mr Obasanjo that he visited to learn from the former president.

The Rivers governor, a PDP presidential aspirant in the 2023 general elections, said it was important to consult Mr Obasanjo, who had ruled Nigeria twice in the past.

“We have come to consult our leader; to consult (with) somebody who has presided over the affairs of this country, not just as a president, but also as a former military head of state. The kind of experience he had and the passion he has for this country coupled with his continuous preaching for unity and peace is something to be emulated,” noted Mr Wike. “This country requires somebody who has the courage, somebody who can take a firm decision and somebody who wants to unite Nigerians, and that is what we think that we should do.”

Mr Obasanjo noted that all hands must be on deck to address the country’s challenges.

The former president explained that the issues Mr Wike raised were dear to his heart for the unity and stability of Nigeria.

“If we are sincere and fair to ourselves, it is not a difficult country. I ceased to be a partisan politician. I don’t belong to any political party, but if politics is the welfare of the people, I cannot cease to be a politician because I must always seek the welfare of the people,” Mr Obasanjo said. “As I often say, no one individual can say yes, I can do it because the situation Nigeria is in today, we need all hands, all Nigerian hands on deck to restore Nigeria, and that is what Governor Wike is saying to me. I wish Governor Wike well.”