USA and Wales played out a 1-1 in their opening World Cup match, courtesy of goals from veteran Welshman Gareth Bale and Timothy Weah. 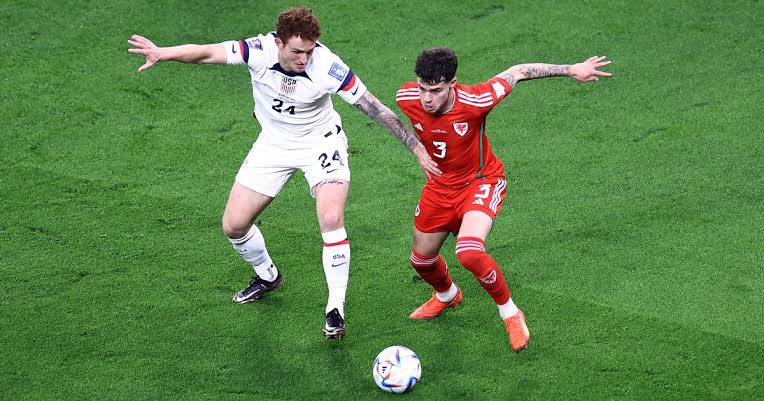 USA and Wales shared the spoils in their opening encounter at the Qatar 2022 World Cup on Monday, courtesy of goals veteran Welshman Gareth Bale and Timothy Weah.

Timothy is President George Weah of Liberia’s son but he is representing the U.S. where he was born, a feat his father failed to achieve during his illustrious playing career, even as captain of the Liberian national team.

The United States were the better side in the first half of the encounter at the Ahmed bin Ali Stadium in Al Rayyan. After holding possession for extended periods, Weah latched the ball from outside the box which went past Wales goalkeeper Wayne Hennessey to give the Americans a 1-0 halftime lead.

The tide of the match shifted to the Welsh side in the second half, with The Dragons controlling the momentum of the game in search for an equaliser.

Wales came close to securing a leveller in the 65th minute when Ben Davies nodded the ball towards the American goal post from Gareth Bale’s cross but the USA goalkeeper Matt Turner pulled it off for a corner kick.

The Dragons almost scored from the corner kick but Moore’s header slightly went over the crossbar.

Wales’ pressure on the Americans half finally paid off when a penalty was awarded to the Welsh following a careless sliding tackle from Zimmerman inside the American area that caught Bale. The former Real Madrid man calmly slotted it to equalise for Wales.

Afterwards, both teams launched several attempts on each other’s half in search of a winner but they were to no avail as they settled for a stalemate to go behind England, who dismantled Iran 6-2 in their opening game of the Group B earlier today.