The FIFA president spoke for nearly an hour and defended the tournament and Qatar. 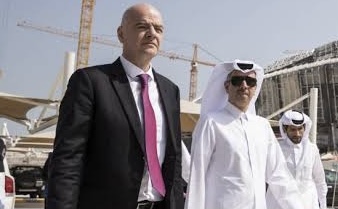 FIFA president Gianni Infantino has accused the Western countries of “hypocrisy” and slammed the criticism towards World Cup hosts Qatar during his opening speech ahead of the tournament on Saturday.

The FIFA president spoke for nearly an hour and defended the tournament and Qatar.

“For what we Europeans have been doing around the world in the last 3,000 years, we should be apologising for the next 3,000 years before starting to give moral lessons to people,” the head of the football governing body said.

“How many of these European or Western business companies who earn millions from Qatar, billions, how many of them have addressed migrant workers’ rights with the authorities?

“None of them because if you change the legislation, it means less profit. But we did, and FIFA generates much less than any of these companies from Qatar.”

The country has been sharply criticised for its human rights conditions, the deaths of migrant workers, and its treatment of LGBTQ people.

Infantino opened his monologue by saying, “Today, I have strong feelings. Today I feel Qatari; I feel Arab, I feel African, I feel gay, I feel disabled, I feel a migrant worker.”

His statement was immediately criticised on social media, with many pointing out that if he were indeed gay, he would not be able to openly say that in Qatar, where homosexuality is illegal under Islamic Sharia law.

Ahead of the World Cup, former Qatar international Khalid Salman, one of several tournament ambassadors starting on Sunday, named being gay “damage in the mind.”