With the defeat, Qatar set an unwanted record as the first host or co-host of the FIFA World Cup to lose in the opening game of the competition. 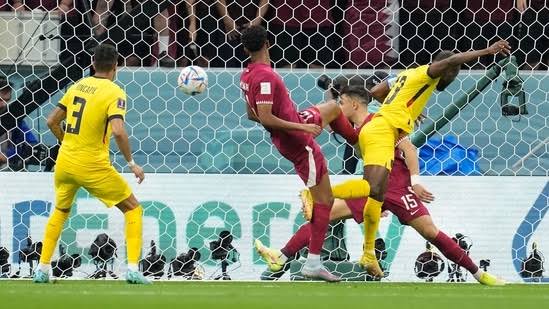 Qatar began their 2022 FIFA World Cup campaign with a 2-0 defeat at the hands of Ecuador on Sunday, becoming the first host nation to lose the opening game of the competition.

A visually dazzling opening ceremony saw a cameo from American actor Morgan Freeman amongst several stars and a musical performance by Jungkook of the popular South Korean music group BTS.

It wasn’t the anticipated opening of the campaign for Qatar in the Group A encounter as Enner Valencia found the back of the net barely three minutes into the fixture. Unfortunately, it was ruled out for an offside.

Ecuador maintained pressure in the Qatari half and subsequently resulted in a penalty being awarded to them after a foul on Valencia by goalkeeper Saad Al Sheeb. Valencia scored from the spot kick to net the first goal in the 22nd edition of the World Cup.

It is also the first time that the opening goal of a FIFA World Cup would be a penalty kick in the 92-year-old history of the competition.

Sixteen minutes later, Valencia found the back net through a powerful header from a well placed cross to double the lead for Ecuador and maintained the composure of the game.

Qatar only came close to pulling one back with the last kick of the first half but Almoez Ali was unable to convert the golden opportunity from a perfect crossing, with the Ecuador goalkeeper out of his line.

After halftime, the response from Qatar changed for the better, controlling large parts of the second half in what was a sharp overturn of the first half performance but were unable to break the Ecaudorians’ defence line.

Qatari fans at the Al Bayt Stadium in Al Khor, however, continued to cheer on the home side.

There was no moment of real significance in the second half of the fixture which produced no goal as Ecuador walked away with an impressive 2-0 victory to provisionally go top of Group A with three points.

With the defeat, Qatar set an unwanted record as the first host or co-host of the FIFA World Cup to lose in the opening game of the competition. Previous editions had produced 15 victories and six draws.