The Spanish 19-year-old Alcaraz claimed his fourth title of the season at the Madrid Open on Sunday, defeating world number three Alexander Zverev in the final match. 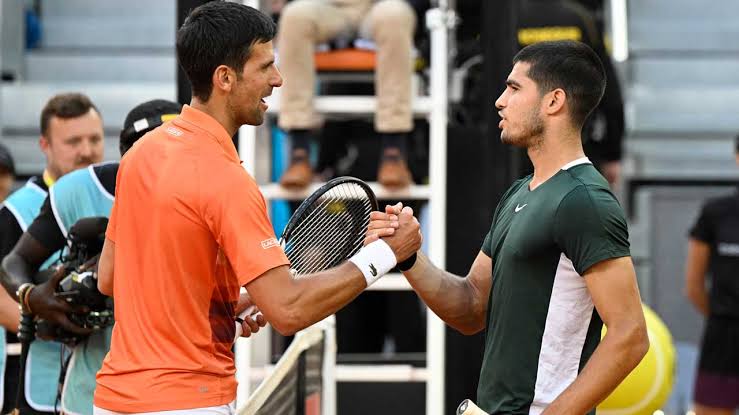 Carlos Alcaraz is the best player on the ATP Tour at the moment, according to world number one Novak Djokovic.

The Spanish 19-year-old Alcaraz claimed his fourth title of the season at the Madrid Open on Sunday, defeating world number three Alexander Zverev in the final match.

This was after overcoming Djokovic and Rafael Nadal in his two previous matches.

The teenager has surged up to a career-high sixth in the world rankings as a result.

He has, however, opted against competing at this week’s Internazionali d’Italia with the French Open rapidly approaching.

“He definitely is special,” said Djokovic, who will begin his campaign in Rome against Aslan Karatsev on Tuesday. “Already he’s breaking a lot of records as a teenager, winning two Masters events this year, a couple of 500s. So far, he’s the best player in the world, no question, this year with the results that he’s been doing.”

Djokovic added, “The way he was dealing with the pressure… In our match few days ago, how calm he was all the way until the [end] was impressive. He deserved to win the trophy. Everything about his game is really impressive. He’s a really complete player, can play equally well offensively and defensively. He’s the talk of the sport.”

Djokovic has yet to win any silverware this season and possesses a 7-4 record.

But the Serb felt as though he had turned a corner ahead of Roland Garros, where he beat Stefanos Tsitsipas to win his second French Open title last year.

“I think it’s closer to [my] desired level every week,” he explained. “Madrid, even though I lost in the semi-finals, I still think I played really good tennis, felt physically 100 per cent, even after an almost three-and-a-half-hour battle against Alcaraz. I recovered well the next day, was ready to go. That’s a positive and encouraging factor prior to Rome and also, of course, the big goal, which is Paris.”

He further stated, “I think I’m (going) in the right direction. I know I can always play better, and I know that I’m very self-critical on the court. At the same time, realistically looking, I think the tennis, quality of tennis, level of tennis, is really high now. Hopefully I can maintain that level throughout this week and build, go deep in this tournament hopefully — that’s the goal — and come to Paris well-prepared.”