ANALYSIS: Boko Haram, growing insecurity and implications for the 2023 elections

“A ruling party that has delivered poverty and insecurity might find it convenient to postpone elections… in a bid to hold on to power.” 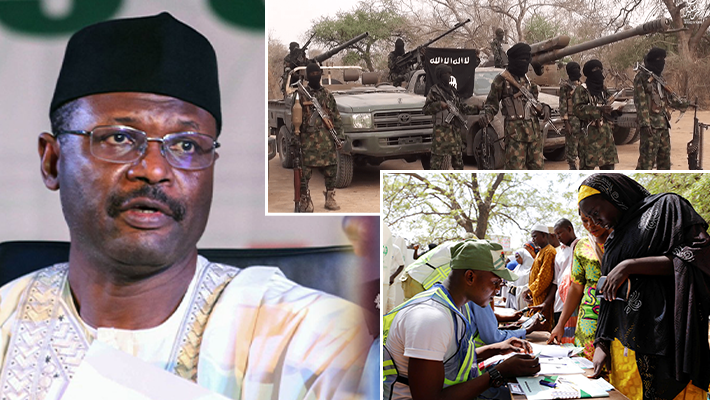 A composite of INEC Chair Mahmood Yakub, Boko Haram and voters used to illustrate this story

Boko Haram continues to extend its reach across northern Nigeria from its base in North-East, taking advantage of old and new local conflicts and security frailties in the area through violent extremism.

The terrorist organisation started as an isolated sect in Yobe state in 2002 under the leadership of Salafist preacher Mohamed Yusuf. Its push was based on the return to what was believed to be the true tenets of Islam.

These beliefs were supposed to be the cure to corruption, poor governance, poverty, and other (mainly Western-imported) societal ills.
However, after Mr Yusuf was killed by the government in 2009, the scale and brutality of Boko Haram violence tripled under the leadership of his deputy, Abubakar Shekau.

The group first globally announced its deadly propensity with the bombing of UN building in Abuja on August 26, 2011. The abduction of the Chibok girls from a school in Borno state further drew international media attention to the group in 2014.

The bombing of the Central Mosque in Kano again highlighted the scale of the sect’s reach outside its base in the Sambisa forest in Borno state. In 2015, Boko Haram moved further to capture and control territories in Borno, Yobe, and Adamawa states in addition to attacks carried out in Cameroon.

Since January 2019, scores of people in the North-West states of Kaduna, Katsina, Sokoto, and Zamfara have been killed or injured. Many others have lost their livelihoods, been displaced and hundreds have been abducted for ransom, nurturing an economy of violence.

In 2014, The Norwegian Peacebuilding Resource Center listed economic marginalisation, governance failures, extremist operations, and security failures as the four explanatory factors behind the insurgency: Economic causes were linked to poverty, unemployment, and extreme inequality between northern and southern Nigeria, while governance failures relate to national religious polarisation, political tussles among the religious elite, and corruption in the face of mass poverty.

Organised crime is another factor. Banditry, kidnapping, and armed robbery have fuelled a lucrative economy in the trafficking of small arms, light weapons, and other contraband.

Boko Haram is taking advantage of the unresolved and escalating local conflicts and rising organized crime to expand and recruit. Peoples Gazette reported on how the arms trade contributed to the terror and violence spreading across the country.
Since January, Nigeria has witnessed multiple kidnappings and murders,claiming new territories around the Capital, overwhelmed the army, and displaced thousands of citizens fuelling humanitarian crises.

The Independent National Electoral Commission announced the date for the 2023 presidential election though the legislature has failed to pass the amendment for the current electoral laws in the first quarter of 2021, as promised.

The Senate president, Ahmed Lawan in April said the parliament would work to pass the law in June.

In the days after that, while INEC offices have been set ablaze and destroyed in southern states such as Akwa Ibom, Enugu and Abia, and the Commission is yet to address those incidents, additional polling units are being pushed for in Northern states such as Yobe and Gombe.

Insecurity poses a threat to electoral processes in the region, particularly given the group’s history of civilian attacks. In January 2019, the group launched two separate attacks on the Borno state town of Rann, killing over 60 people and displacing 30,000 others.

Out of Nigeria’s six geopolitical zones, the ruling All Progressives Congress is most popular in the North-West, North-Central, and North-East, which doubles as the most insecure zones in the country.

In the 2015 elections, 81.3 per cent of all voters who casted ballots in the North-West in the last election, voted for Muhammadu Buhari. This could mean the region will again be a deciding factor in delivering another bloc votes for the APC. However, voting turnout in the region could be significantly impacted by mass outbreaks of violence linked.
Similar to the 2015 elections, the issue of national security is a central concern to voters and could affect election results.

“Further, it may also affect deployment and the logistics of INEC and it’s ability to recruit quality election personnel. The pervasive insecurity across the country certainly doesn’t augur well for the conduct of free and credible elections. It portrays a clear and present danger inimical to good elections.”

Oseh Anenih, a political commentator, also offers his insight on the political landscape; “When we don’t have a postponement because of security issues like we did in 2015; logistic failures have caused postponements like we saw in 2019. With the rising insecurity, I think it is reasonable to expect that the general elections will be impacted.”

Mr Anenih suggests that the electoral commission sets out to address the security concerns ahead of the 2023 political cycle, adding that “a ruling party that has delivered poverty and insecurity might find it convenient to postpone elections they will most probably lose; in a bid to hold on to power.”

Mr Anenih also mentions the new service chiefs as an important factor for the elections to hold, he says, “If they are able to mount a push back against Boko Haram like we witnessed just before the presidential elections in 2015, then Nigerians should be able to vote safely.”

However, Rotimi Oyekanmi, the Chief Press Secretary to the INEC Chairman, assured The Gazette that the electoral commission is working around the crisis, appreciating the efforts of the security agencies which made it possible for INEC to conduct both the 2015 and 2019 General Elections.

“Preparations for the 2023 general election have already begun. But no election can take place in the midst of chaos. The Commission liaises with security agencies under the auspices of the Inter Agency Consultative Committee on Election Security (ICCES) on a quarterly basis,  to discuss specific security matters affecting locations where elections are due to be held,” Mr Oyekanmi says.

Noting the displacement of eligible voters as a result of the violence, Mr Oyekanmi tells the Gazette that “The Commission also has a policy on Internally Displaced Persons (IDP) Voting, which allows internally displaced persons in official camps to vote in the 2019 general election. The policy was put in place to ensure that all eligible voters in IDP Camps are not disenfranchised.”