The commission’s intelligence department conducted a forensic probe of Adamawa’s finances under the former governor and uncovered billions in stolen, diverted and laundered funds. 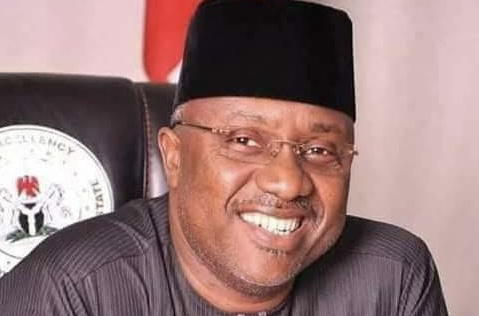 A discreet investigation by the Economic and Financial Crimes Commission has turned up how former Adamawa governor and APC chieftain Bindow Jibrilla participated in looting the state’s treasury to the tune of N62 billion.

The commission’s intelligence department carried out a forensic analysis of Adamawa’s finances under Mr Bindow and uncovered billions in stolen and diverted funds through several bank accounts linked to the politician, according to EFCC’s records of the investigation shared with Peoples Gazette.

Mr Bindow, 59, was elected governor in 2015 and lost his reelection attempt in 2019 to Ahmadu Fintiri. Earlier this year, he sought the party’s ticket in an attempt to return to office in the upcoming general elections but failed. Anti-graft detectives said the ruling party politician used several Zenith Bank accounts linked to state government to steal billions from the state’s impoverished residents — most of which he subsequently laundered through shoddy schemes.

Mr Bindow did not return multiple requests seeking comments from The Gazette, despite initially promising for weeks that he would send in a reaction about his role. A spokesman for Mr Bindow declined clarification on the governor’s role.

EFCC chairman Abdulrasheed Bawo characterised the report as part of an ongoing investigation into Adamawa’s finances, informing The Gazette he was not sure when charges would be filed.

“The investigation is still ongoing,” the EFCC chief said, adding that it was difficult to make immediate disclosure as to critical stages of a criminal proceeding.

The 23-page financial intelligence report showed illicit withdrawals were coordinated in a manner that suggested key officials of the Adamawa state government were complicit and may be part of a larger syndicate that diverted public funds and laundered money to shore up their personal wealth, leaving residents at the mercy of bandits and terrorists. Some of the stolen funds were traced to the current administration led by Mr Fintiri, documents said.

“The funds were withdrawn in a structured manner and without known economic justification to support the cash withdrawals. The transactions are highly unusual and suggestive of diversion of public funds, personal enrichment and money laundering,” the report stated.

Outflows from the special service government house account 1011284469 peaked at N51.54 billion. An assumed state official named “Mary P” had single handedly withdrawn N44.14 billion from the account in several tranches of at least N10 million per withdrawal between January 1, 2015, and July 2021.

“On 3rd May 2018, the account witnessed same day structured cash outflows via cheque in 27 tranches of N10, 000.000.00 (Ten million naira only) amounting to a total sum of N270,000,000.00 (Two hundred and seventy million nalra only) in favor of one Mary P,” EFCC stated citing instances of suspicious withdrawals during Mr Bindow’s tenure.

“On 27 May, 2021, the account witnessed same day structured cash outflows via cheque in 26 tranches of N10, 000.000.00 in favour of one Mary P,” officials added, citing another instance of suspicious withdrawal under Mr Fintiri.

Mary P’s fraudulent withdrawals spanning seven years across two administrations appeared to validat concerns that the state’s incumbent governor and his predecessor were indeed colluding to rob Adamawa residents. The state is among the poorest in the country with education and health remaining substantially underfunded.

For the Government House Yola account 1011257469 with Zenith Bank, N19.55 billion was withdrawn “via cheques in favour of several individuals and government agencies.” One Adamu Digil and Ibrahim Bappa were named to have cashed the majority of the cheques.

Moris Halhaldi, Rifkatu Ibrahim, Augustina Maimuna Wandamiya and Aliyu Madawaki were mentioned as the persons who cashed the cheques, breaking it into tranches of hundreds of millions on different days for collection.

The EFCC interestingly discovered the aforementioned names were also serving as prosecution witnesses in an ongoing fraud trial against Murtala Nyako, another ex-governor of Adamawa state.

“This is due to the roles they played during the tenure of the former Governor. Based on these findings. It is obvious that five years later, they are still within the system and enabling the perpetuation of diversion of public funds,” disclosed the classified document.

Although Mr Bawa told The Gazette charges would be filed upon conclusion of investigation, the delay contradicted the recommendation of the agency’s intelligence department, which proposed a swift action in order to trap some of the funds and prevent further looting of the state’s treasury.

“We are just waiting for the chairman to act on the matter before it is too late,” an anti-graft official familiar with the investigation told The Gazette. “We cannot continue to see politicians walk free with resources they mindlessly plundered from the poor people of this country.”

Another official expressed concerns that the potency of evidence being collected against Mr Bindow might ebb the longer charges are postponed, citing the recent case of Babachir Lawal, the former federal cabinet secretary who was freed by a federal judge despite evidence of illicit financial activity on his bank accounts.

“We are still mourning what happened to the Babachir Lawal’s case,” the EFCC official said under anonymity to comment on internal headquarters manoeuvres. “That case is a reminder of what could go wrong when we allow politicians to decelerate cases with impunity.”

The EFCC has said Mr Babachir’s case would proceed to appellate stages, but insiders grumbled that the failure to win such a slam dunk case at first instance would not only cause needless deployment of additional resources but also another demoralising phase for the agency’s personnel.