The court ruled that outdated laws “serve only to incentivise law enforcement agents to become keyhole peepers and intruders into the private space of citizens.” 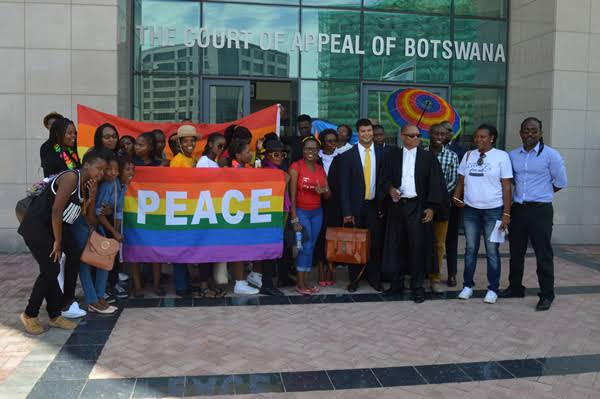 LGBTQ+ activists/supporters outside the Court of Appeal in Botswana [Photo credit: Mamba Online]

The Court of Appeal in Botswana have upheld a 2019 court ruling that decriminalised relationships between members of the same-sex.

The five judges on Botswana’s Court of Appeal had a unanimous decision over the June 2019 landmark decision which recognised homosexuality in the country.

The 2019 decision noted that criminalising same-sex relationships was a violation of the constitutional rights of LGBTQ+ individuals to dignity, liberty, privacy and equality.

“Those sections [of the penal code] have outlived their usefulness, and serve only to incentivise law enforcement agents to become keyhole peepers and intruders into the private space of citizens,” the Court of Appeal President Ian Kirby said in the ruling.

He added that “Since the appellant’s grounds of appeal have been unsuccessful there can be only one outcome and that is that the appeal must fail.”

Mr Kirby said the offending sections of the penal code only serve to encourage law enforcement agents to become keyhole peepers and intrude into the private space of citizens, as the laws have outlived their usefulness.

Before the law decriminalising same-sex relationships, LGBTQ+ people could be prosecuted under sections of the penal code under “unnatural offences” and “carnal knowledge of any person against the order of nature.” Penalties for the crime include seven years in prison.

The LGBTQ+ community in Botswana has received support from its President Mokgweetsi Masisi, who has been vocal in support of the community and their rights as far back as 2018, where Mr Masisi publicly declared that the community had rights just like everyone else.