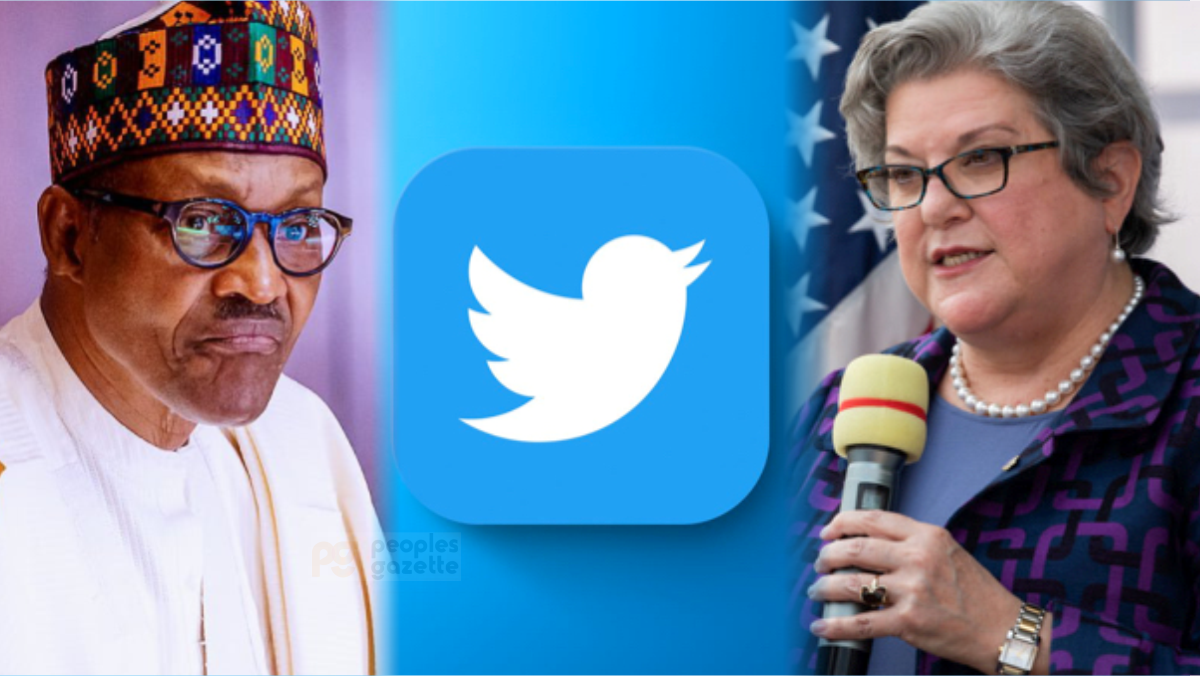 The Buhari regime should respect the Nigerian Constitution in fighting fake news and hate speech on Twitter, says Mary Leonard, the U.S. Ambassador to Nigeria.

The American envoy stated this in an audio statement made available to Peoples Gazette.

Barely 24 hours after the ban, attorney general Abubakar Malami sought to enforce the ban by threatening to arrest and prosecute anyone who tweets in Nigeria.

The development, which criticisms have trailed, followed the removal of Mr Buhari’s tweets threatening the Igbos with genocidal violence.

Ms Leonard maintained that despite the U.S. opposition to the ban, the country did not believe any government should sit idly and watch people engage in online hate speech.

Describing a range of advantages Twitter has, the American diplomat explained that banning the platform in Nigeria with over 30 million users was a wrong approach.

“I think where we differ is that the response to that is not banning social media, which plays so many roles not only in the freedom of expression but in the commercial sphere and disseminating health information but rather addressing that part of the issue,” she noted.

According to her, Mr Buhari’s regime can address the issues by “working within the framework of civil rights law or infrastructure to deter and punish those who would violate the abilities of others to live free of discrimination and violence.”

She recommended that the government collaborate with technology companies to check contents that amount to hate speech and create a suitable atmosphere where citizens “can live their lives in absent violence.”

The ambassador further explained, “Government can expand voluntary collaborations and partnerships with technology companies to address inappropriate content on the platforms.

“I think it’s really important to realise that government has a role, a responsibility in creating an atmosphere in which the citizens can live their lives in absent violence and not about law enforcement that’s about identifying and using the criminal justice system to punish the people who’ll engage in such acts of violence.”

In addition, she pointed out that “those activities need to be firmly grounded” within law enforcement and judicial processes with attention to human rights and some of the bodies.

Stating that the federal government and Twitter are in talks to seek other alternatives, Ms Leonard said the U.S. looked forward to a resolution.

She added that Nigeria needed more communication and efforts towards ensuring unity, peace, and prosperity.

In an interview broadcasted on Thursday, Mr Buhari replied to Arise TV, “I’ll Keep to myself” when asked when his regime would restore Twitter operations in Nigeria.