Trucks run by Dangote Group have killed hundreds of Nigerians in fatal crashes over the past decade alone. 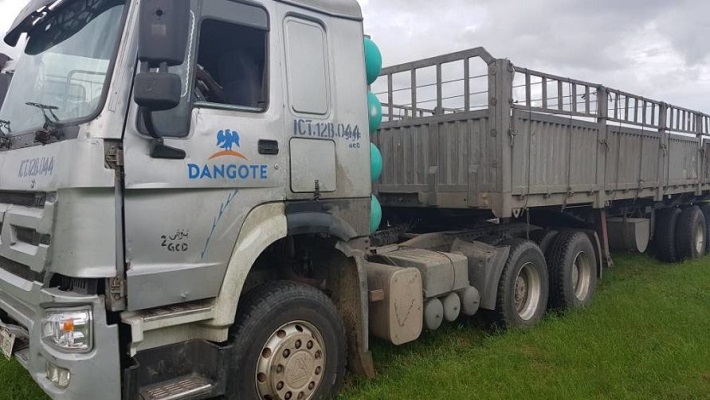 No fewer than eight persons were feared killed while many sustained injuries on Saturday evening, when an articulated truck lost control and ran into some shops at Akungba Akoko in Akoko South West Local Government Area of Ondo State.

The News Agency of Nigeria (NAN) reports that the accident occurred directly opposite the Adekunle Ajasin University barely a month after a similar accident, but in which no life was lost.

Opeoluwa Akinfemiwa, the university’s registrar, said in a statement that the truck involved belonged to Dangote Group, saying the school authorities have decided to shut down the main gate with students advised to use alternative gates to access the campus in the coming weeks.

A witness told NAN the fated truck was coming from Ikare Akoko area in Akoko North East Local Government Area of the state, lost control and ran into some rows of shops along the road.

The bodies have been recovered and moved to a morgue. “The trailer was coming from Ikare Akoko axis and had a brake failure, so the driver lost control of the vehicle and swerved off the road into the shops, where students of the university were shopping.

” As I am talking to you now, we have been able to recover eight bodies, we are still trying to rescue those that are trapped inside the shop,” a witness said.

“The cement trailer was coming from Obajana in Kogi State when it rammed into the shops,” he said. “Eight dead bodies have been recovered and our men are still searching for other trapped victims.”

Trucks run by Dangote Group have killed hundreds of Nigerians in fatal crashes over the past decade alone, despite repeated promises by Aliko Dangote to ensure adequate maintenance of his company’s fleet and training of drivers.