The protesters marched few meters aways from the Lekki Tollgate on Thursday, while carrying coffins, flowers and waving Nigeria’s flag. 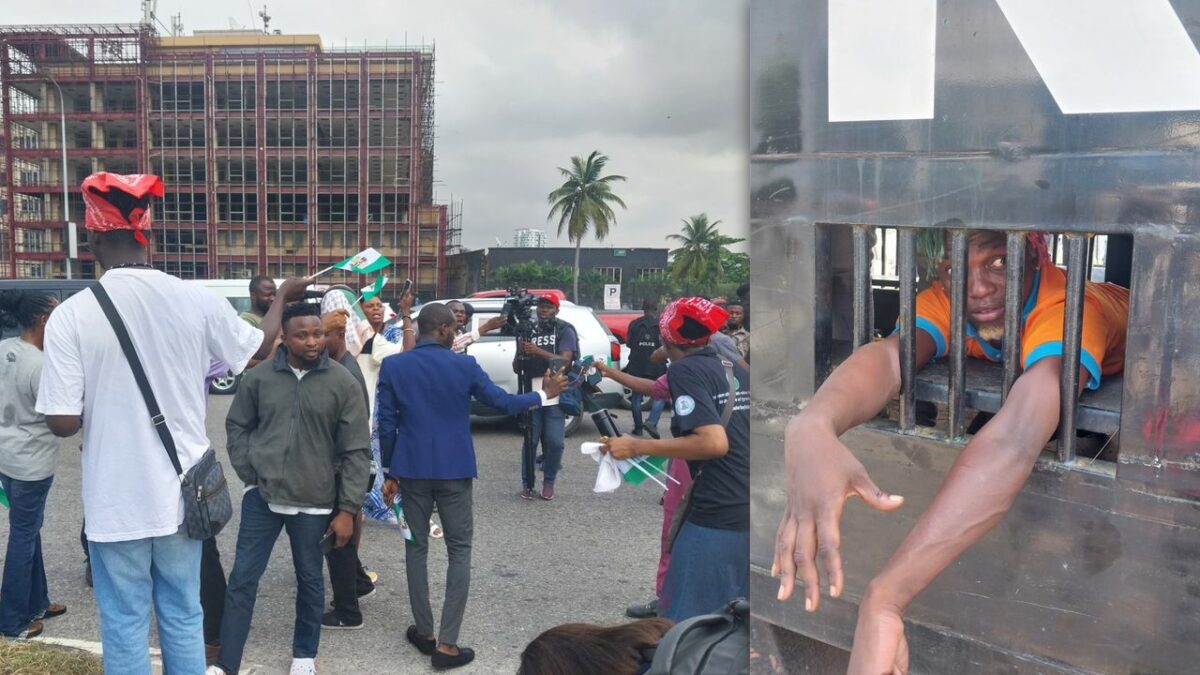 Folarin ‘Falz” Falana, Adebowale “Macaroni” Adedayo and some protesters on Thursday stormed the Lekki Tollgate with coffins, placards and flowers in solidarity with those who lost their lives during the October 2020 protest.

The protesters marched few meters aways from the Lekki Tollgate on Thursday, while carrying coffins, flowers and waving Nigeria’s flag.

They chanted “justice” while calling out the names of the deceased that died on October 20, 2020.

Mr Falana who joined the protest said the protest was in memory of those who lost their lives during the 2020 #EndSARS movement.

He added that the deceased deserve justice noting that the protesters are seeking justice for the perpetrators of the gruesome killings to be “brought to book.”

“We are demanding justice because those people that committed the gruesome crimes on October 20, 2020 have not been punished.”

The singer said that the #EndSARS movement has no political motive but instead the government should look into the recommendations from the panel of inquiry set up to investigate the death of the protesters that died on October 20, 2020.

“EndSARS has never had any affiliation with any political party. It is a movement that started to protest against police brutality

“The panels were set up to look into these matters. Recommendations were made, which clearly states that people were killed by members of the Nigeria Army but till today nothing has been done.

“We are here to remember those that laid down their lives on October 20, 2020. They stayed there up until their last breath and fought for a country that is habitable for them. They remain unforgettable,” stressed Mr Falana.

However, the Lagos police command has deployed its personnel at strategic points at the Lekki Tollgate, with officers seen firing teargas and mishandling protesters.

The officers sprayed water cannons on the protesters to scare them away.

The protesters including journalists scampered to safety following the incident.

Also, the police officers at the protest ground arrested three protesters identified as, Olamide Raheemi, Samuel Ishola and Ifeanyi during the protest at the Lekki tollgate.

The protesters alleged that they were brutalised and locked inside the police van.

Police spokesman in Lagos, Benjamin Hundeyin said in a tweet on Thursday said tear gas was fired to disperse miscreants who were lawlessness during the protest.

He added that there was no evidence of “gunshots” from the police officers at the protest ground.

“Peaceful persons were allowed to move around without interference from the police. Some of them that decided to be lawless and start mounting the toll complex, an action threatening the existing law and order in the area, were dispersed with teargas

“There was no use of baton, neither was there physical contact. We equally do not have any record of shooting. We would, however, appreciate evidence of gunshots, maybe a video, to enable us take appropriate action,” Mr Hundeyin said in a tweet on Thursday.

In 2020, #EndSARS protests were held nationwide between October 8 to 20, calling for an end to police extortion, brutality, extrajudicial killings and abuse of power, and the disbandment of the criminal Special Anti-Robbery Squad (SARS).

The protest, however, turned violent as hoodlums took advantage of the situation, burnt police stations, public facilities and carried out attacks on officers and citizens.

The protest climaxed on October 20 when soldiers opened gunfire on peaceful protesters.

The inquest panel of inquiry set up by the Lagos  state government points fingers at the Nigeria Army for firing gun shots at the protesters, which some protesters eventually died while some sustained injuries from the bullets.