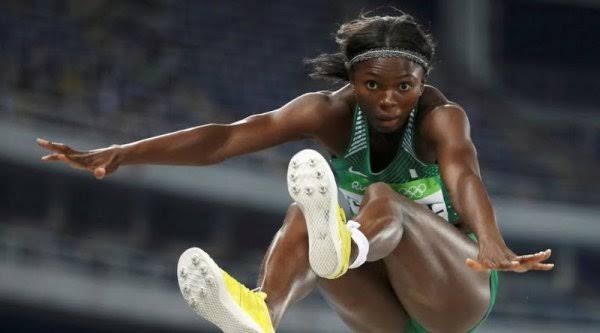 In a tightly contested event that came down to the last round, Ese Brume earned Nigeria’s second medal at the Tokyo 2020 Olympics with a Bronze in the Women’s Long Jump competition.

Brume had the best season time of all the participants heading into the final and she was a medal favourite alongside the world champion Malaika Mihambo of Germany & Brittney Reese of the U.S.

She raced to an early and dominant lead with her first jump, clocking 6.97m. By the second round, Reese had edged her out with an equal jump of 6.97m but leading on count back. World champion Mihambo was just right behind with 6.95m.

Going into the final round, Reese was in the lead, with Brume second in a back and forth that had been going on round by round but Mihambo delivered her best jump of the competition to take the gold with her final jump, dropping Reese to second and Brume to third, as they both couldn’t capitalise with their final jumps.

Ese Brume becomes the third Nigerian woman to win a medal in the Long Jump competition, joining Nigeria’s first gold medalist Chioma Ajunwa (who won in at the 1996 Atlanta Olympics) and Blessing Okagbare who won the silver medal at the 2008 Beijing Olympics.

This is also Nigeria’s first medal in athletics in 13 years.