Abdulaziz Yari was nicknamed the ‘loaded governor’ for his flamboyant waste of public funds, even as he led one of the most deprived states in Nigeria. 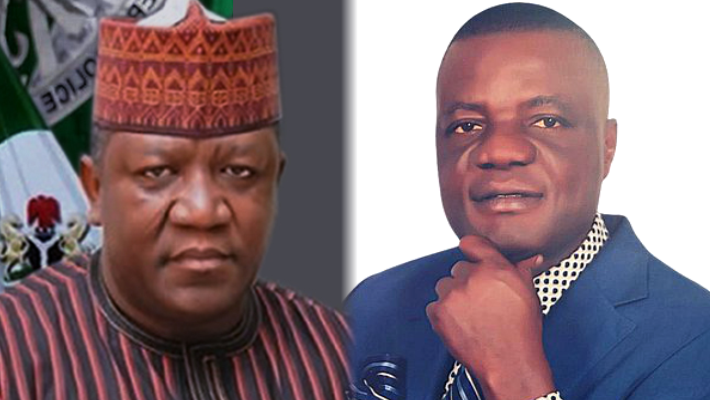 Hours before his tenure was up in Zamfara, Abdulaziz Yari hurriedly transferred N350 million in an unexplained transaction to EFAB Properties Limited, a chain of private estates popular amongst the upper middle-class in Abuja, Peoples Gazette can report.

The transfer on May 28, 2019, was deposited around midnight, hours before the transfer of power on May 29, directly by Mr. Yari into the bank account of EFAB Properties, documents said. The Zenith Bank account number 1013121003 was linked directly to the telephone number of Fabian Nwaora, the controversial public works contractor infamous for his use of sundry companies to corner lucrative government contracts.

The Gazette obtained records of the suspicious transaction as anti-graft EFCC intensified its probe of Mr. Yari over allegations of public finance looting and misappropriation. He was invited for questioning on Tuesday as part of the probe, which incumbent Governor Bello Matawalle said was over N107 billion.

Anti-graft officials said they have been investigating Mr. Yari for a slew of last-minute withdrawals from state coffers. Officials admitted to the Gazette that the N350 million transaction to EFAB was not previously uncovered, saying it marked strong indications that the former governor has several other businesses he has put money into but which might be near impossible to trace.

“We have been investigating him since 2019 and we are seeing signs that we have not traced up to 20 percent of the money he stole while in office,” an EFCC official said. “This revelation about his transfer to EFAB Properties is new and will encourage us to continue digging even though we are not hopeful about unearthing all the funds he diverted.”

Another official also said the EFCC had received multiple hints about Mr. Nwaora and his ties to public officials and other politically-exposed persons.

“Chief Nwaora and his family have dozens of companies they have been using to take government contracts,” the official said. “We have been investigating them as a front for Abuja treasury looters and, therefore, a conduit for siphoning public funds meant for the development of the people.”

Some of the companies include Unique-Life Properties Ltd., Power Cleit Ltd., Lansoj Ltd., and Fab Henr Nigeria Ltd. — all of which are separate entities from EFAB Properties, which also has a large customer base in Anambra.

The officials sought strict anonymity to discuss an ongoing investigation, saying they were compelled to discuss the matter with the Gazette because they found the evidence uncovered by the newspaper as credible and useful towards their labour to nail the former governor and his business interests.

Reached for comments, Mr. Nwaora told the Gazette that his business with Mr. Yari was legitimate, but failed to elaborate on the purpose of the N350 million sent on the eve of handover. Mr. Yari did not comment after being shown our findings, despite repeated assurances that his comments would be sent to the Gazette.

The N350 million transfer was found in a trove of bank documents anonymously shared with the Gazette. Since October 2020, several stories have been published from the file, including suspected fraud by Lagos House Speaker Mudashiru Obasa, how Lagos funds had been moving from tax contractor Alpha-Beta to Bola Tinubu’s businesses, Aliko Dangote’s questionable payout to the head of Nigerian Ports Authority and Ibikunle Amosun’s curious payment to President Buhari’s personal bank account.

Over the weekend, our reporters received death threats after exposing how Governor David Umahi was transferring large funds from his Ebonyi treasury into his personal business interest, a practice that violated the code of conduct for public officials.

A federal court last week, ordered the final forfeiture of $669,247 and over N241 million traced to Mr. Yari’s Polaris and Zenith accounts — funds suspected to have been “brazenly pillaged from Zamfara coffers,” according to an anti-graft detective.

A group of anti-corruption campaigners also filed a petition to the EFCC this week, accusing Mr. Yari of stealing in excess of N200 billion from Zamfara.

Rather than focusing on improving health, education and other critical needs of the people of Zamfara, one of Nigeria’s poorest states with a 70.8 percent poverty rate, according to the country’s statistics office, NBS, Mr. Yari’s tenure was instead widely associated with looting and political controversies.

“Because of how he was lavishing money on everybody, he was nicknamed the ‘loaded governor’ by some officials at the Nigerian Governors’ Forum,” an NGF official told the Gazette. “It was as if he was not governing Zamfara State with all its deprivation.”

He chaired the influencial NGF until his exit from office. Mr. Matawalle, who faced serious huddles to emerge against Mr. Yari’s anointed successor, has since accused his predecessor of allegedly “paying himself” N360 million from Zamfara pension fund. Mr. Yari denied the allegations.

Despite strong indications that he enriched himself from the meagre treasury of Zamfara, Mr. Yari still pushed to guarantee a lavish retirement for himself and political associates.

In March 2019, two months before relinquishing his privileges as Zamfara governor, Mr. Yari ratified the amendment of the state’s pension law to accommodate a N10 million ‘monthly upkeep’ for ex-governors, including other lavish benefits not limited to the provision of a luxurious apartment in the country’s capital.

The controversial law was ultimately repealed by the state parliament despite stiff opposition from Mr. Yari, who had initially written his successor to query the stalled payment of his humongous allowance.