The French embassy said Burkina Faso’s military police did nothing on November 18 as hundreds of protesters violently attacked the embassy. 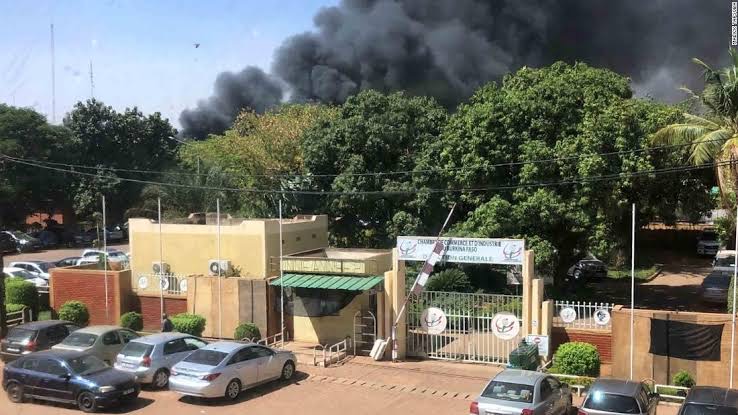 The French embassy in Burkina Faso has asked the West African state for more protection after violent protests targeted the property.

In a letter to Burkina Faso’s foreign ministry seen by Reuters, the French embassy said Burkina Faso’s military police did nothing on November 18 as hundreds of protesters violently attacked the embassy, throwing stones and other projectiles at its walls.

According to the letter, some officers charged with protecting the embassy were captured on video playing cards as the protest unfolded.

Anti-French sentiment and protests have surged this year in Burkina Faso, a former French colony where France maintains strong ties and has special forces stationed there.

Some protesters marched to the gates of the French military base, demanding that soldiers leave.

A diplomatic source said the embassy sent a letter to authorities over the weekend asking to respect international conventions protecting diplomatic enclaves and increasing security around the embassy.

The embassy has submitted several requests of this kind, and the foreign ministry has assured demands would be met, the source told Reuters on Monday.

Burkina Faso’s chief of staff of the national gendarmerie Evrard Somda said the officers outside the embassy were not equipped to handle the protest and that he was waiting for orders from authorities to send in reinforcements, which took several hours.

As for the gendarmes who were playing cards, he said he had seen the video and was handling the problem internally.

Fed up with a worsening Islamist insurgency and what is perceived as neo-colonial influence from Paris, some Burkinabe have followed the lead of neighbouring Mali in calling for a stronger partnership with Russia and for France to leave.

Demonstrators targeted the French embassy in early October, the day after Burkina Faso’s military leader Ibrahim Traore announced he had overthrown the government in the country’s second coup this year.

Protesters set the French embassy on fire after Mr Traore claimed the leader he ousted, Paul-Henri Damiba, had taken refuge at a French army base, which France denied.

“The events suffered in October and November are susceptible to be repeated in the coming days if nothing is done,” said the French embassy letter dated November 19.

It requested security reinforcements at the French embassy, the ambassador’s residence and French schools and cultural establishments in the capital Ouagadougou and the city of Bobo-Dioulasso.

A spokesperson for Burkina Faso’s foreign ministry, Celine Ilboudo, said it had not yet received the November 19 letter but confirmed the French embassy had previously sent mail about the issue.