G20 divided over bid to condemn Russia’s invasion of Ukraine

The summit on the Indonesian island of Bali was the first G20 leaders’ meeting since Russia sent its troops into Ukraine in February. 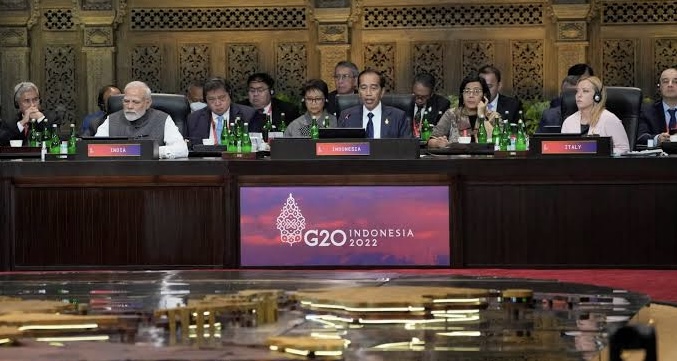 Disagreement emerged at the G20 summit on Tuesday as the United States and its allies backed a resolution condemning Russia’s invasion of Ukraine, which Russia’s foreign minister dismissed as unwarranted politicisation.

The summit on the Indonesian island of Bali was the first G20 leaders’ meeting since Russia sent its troops into Ukraine in February.

The war, which Russia has described as a “special military operation,” has overshadowed the meeting despite calls from host Indonesia for unity and a focus on action to resolve global economic problems like inflation and food and energy security.

A 16-page draft declaration seen by Reuters said, “Most members strongly condemned the war in Ukraine and stressed it is causing immense human suffering and aggravating existing fragilities in the global economy.”

It added there were other views and different assessments of the situation and sanctions.

Russian Foreign Minister Sergei Lavrov, who was heading his country’s delegation in the absence of President Vladimir Putin, denounced the attempt to condemn Russia as politicisation by Western countries that had tried unsuccessfully to include it in the declaration.

Mr Lavrov said Russia had put forward an alternative view, and the draft would be completed on Wednesday.

A U.S. official said earlier that the United States expected the G20 to condemn Russia’s war in Ukraine and its impact on the global economy.

German Chancellor Olaf Scholz said there were encouraging signs of a consensus that Russia’s war against Ukraine was unacceptable.

G20 ministers’ gatherings have failed to produce joint declarations due to disagreement between Russia and other members on language, including how to describe the war in Ukraine.

Earlier, Ukrainian President Volodymyr Zelensky told the summit in a virtual address that now was the time to stop Russia’s war in his country under a plan he has proposed “justly and on the basis of the UN Charter and international law.’’

“Please choose your path for leadership – and together, we will surely implement the peace formula,” said Mr Zelensky.

Mr Lavrov, who dismissed a news agency report on Monday that he had been taken to hospital in Bali with a heart condition, said he had listened to Mr Zelensky’s address, adding that the Ukrainian leader was dragging out the conflict and not listening to Western advice.

Russia’s invasion of Ukraine triggered calls by some Western leaders for a boycott of the summit and the withdrawal of Mr Putin’s invitation, but Indonesia refused to do so.

Russia said earlier that Mr Putin was too busy to attend the summit and Mr Lavrov was taking his place.