Mr Abiodun presented a fiscal Appropriation Bill of N472.25 billion to the State House of Assembly on Thursday. 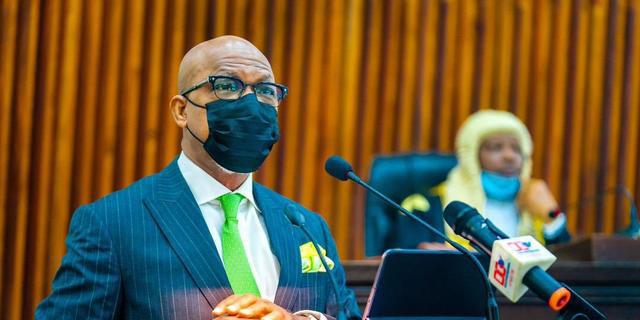 Governor Dapo Abiodun of Ogun on Thursday presented a fiscal Appropriation Bill of N472.25 billion to the State House of Assembly, with N270.41 billion earmarked as capital expenditure.

The Appropriation Bill, christened “Budget of Continued Development and Prosperity”, also has N79.49 billion as personnel cost, with N61.35 billion earmarked for overhead expenses; just as N39.90 billion is for public debt charge.

The governor said an estimated N210.25 billion was projected as internally-generated revenue, with statutory allocation expected to be N92 billion.

Mr Abiodun added that capital receipt, which included internal and external loans, as well as grants and aids, were projected at N128.37 billion.

He further explained that infrastructure would gulp N129.37 billion, representing 27 per cent of the budget.

He stated that the 2023 budget was expected to achieve social cohesion that would continue to focus on equitable socio-economic growth and development.

“Our main objective in 2023 is to maintain and enlarge our economic base, while being strategic towards harnessing economic opportunities in the outer years of our administration, conscious of victory at the coming polls.

“The key physical capital projects in the 2023 budget include implementation of schemes for power generation, to improve and guarantee electricity supply to our major cities, business clusters and estates.

“It includes development of a dry port at Kajola, to leverage on the existing rail network in that axis and rehabilitation, reconstruction and maintenance of roads

“We also have completion of the Agro-Cargo Airport, renovation and upgrading of Primary Healthcare Centres and procurement of Medical Equipment to PHCs across the state, among others,” he said.

In his remarks, Olakunle Oluomo, the Speaker, noted that the budget would be thoroughly looked at, saying that the assembly would ensure accelerated studying and passage.

Mr Oluomo added that the cordial relationship among the three tiers of government would further strengthen the socio economic growth of the state.

The speaker explained that the state assembly had considered 83 bills in the last three years, saying that 37 bills and 17 resolutions were passed.