I don’t need physical health to be president; I’m not a bricklayer: Tinubu 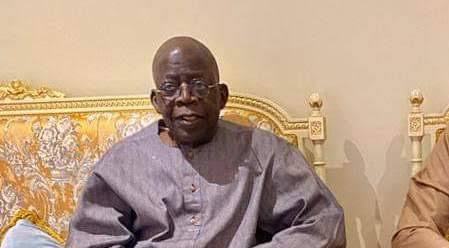 Mr Tinubu said this in reaction to rising concerns about his frail health.

“I am the quality that Nigeria is looking for to make this country very great, prosperous and united, not only in Africa but in the world,” Mr Tinubu said when he visited the palace of the Ooni of Ife and Owa Obokun of Ijesaland, in Osun State on Thursday.

“I will not let Nigerians down. I have the brain and capacity.”

Mr Tinubu returned to Nigeria last October after spending three months in a London hospital. His media office said he underwent a knee surgery and took so much time to rehabilitate.

Much murmurings ensued again when Mr Tinubu returned to London in January after gruelling weeks of political consultations around the country. His supporters insisted that the abrupt travel was not on health grounds. He returned to Nigeria weeks later.

A video of Mr Tinubu’s dress soaked from behind published by Peoples Gazette two weeks ago elicited fresh rounds of criticsm among Nigerians with many suggesting the APC chieftain is suffering from urinary incontinence.

Days later, Mr Tinubu’s estranged protégé, Rauf Aregbesola who is also the minister of interior, derided him at a political rally, saying “won ti n to ara”, an expression meaning “they’re already urinating on themselves”, in native Yoruba language.