Mr Ayemoni said the suspects were arrested during an expanded forest combing operation undertaken by the police and other security networks in the state. 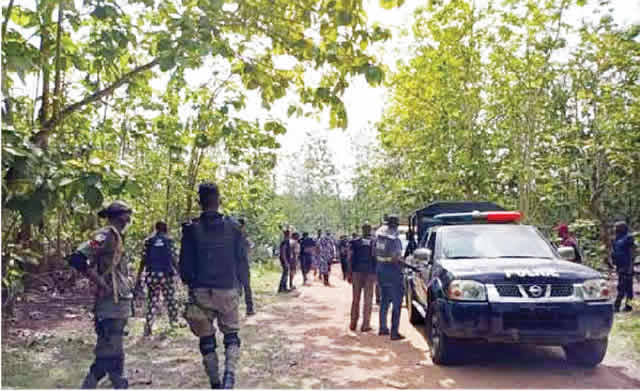 The Ekiti State police command on Friday said it has arrested two men responsible for the alleged kidnap of a farmer, Segun Adams, in his farm at Kajola in Ado Local Government Area of Ekiti recently.

Sunday Ayemoni, the command’s Deputy Public Relations Officer, while briefing journalists on the arrest in Ado-Ekiti gave the names of the suspects as Ojo Jubril and Job Mathew.

Mr Ayemoni said the suspects were arrested during an expanded forest combing operation undertaken by the police and other security networks in the state.

He said the culprits were involved in  the alleged kidnapping, murder, conspiracy and armed robbery.

Mr Ayemoni said; “On Nov. 23, 2022, at about 3:30 p.m., while the command operatives were on a rescue operation inside Ijan- Ekiti in Gbonyin Local Government area’s forest, they arrested two notorious kidnappers namely; Ojo Jubril and Job Matthew.

“Upon interrogation, the arrested suspects confessed that they kidnapped one Adams Segun, 55 years, in his Kajola Farm settlement, Ijan-Ekiti on  Nov.16 , 2022.

“The suspects confessed to various kidnappings in Ekiti State and mentioned one Daniel Matthew, Busuyi Popoola, and Daniel, second name unknown, as their accomplices.

“They confessed further that they were responsible for the killing of one Adams Segun, one of their kidnap victims”.

Mr Ayemoni said that exhibits such as one cut-to-size single barrel and expended cartridge, were recovered from the arrested suspects.

He said that the police also arrested a man identified as Ibrahim Babangida during a bush combing of Government Reserve forest along Odo-Ado, Ijan-Ekiti, Ise-Ekiti, Emure-Ekiti and Ikere-Ekiti.

According to him, after Mr Babangida’s arrest, other members of the gang, on sighting the police, escaped into the bush in different directions.

“Upon interrogation, the suspects confessed to  have been responsible for the kidnapping of one Tiasu Mohammed and Abdullahi Saleh in Odido Farm Settlement of Ado–Ekiti on  Oct. 28, 2022, at about 10.00 p.m.”

The police image maker also said that three kidnappers, who were allegedly involved in the abduction of a school principal, Oladele Emmanuel, Olajide Idowu, Ajayi Folorunsho and Ijaodola, had been arrested.

He said the quartet were kidnapped while on transit along the Irele/Oke-Ako Road that has become notorious and prone to reckless abduction in recent times.

“Upon receipt of the information; our operatives, in collaboration with the personnel of the Nigerian Army, Civil Defence Corps and Vigilance group, trailed the hoodlums into the forest between Irele and Iyemero-Ekiti, where the operatives had a gun duel with them.

“They were overpowered by the superior firepower of the security operatives, which led to the rescue of the kidnap victims and  the arrest of three suspects,” he said.