The protesting students called on the Buhari regime to pay all outstanding arrears and salaries of the striking lecturers. 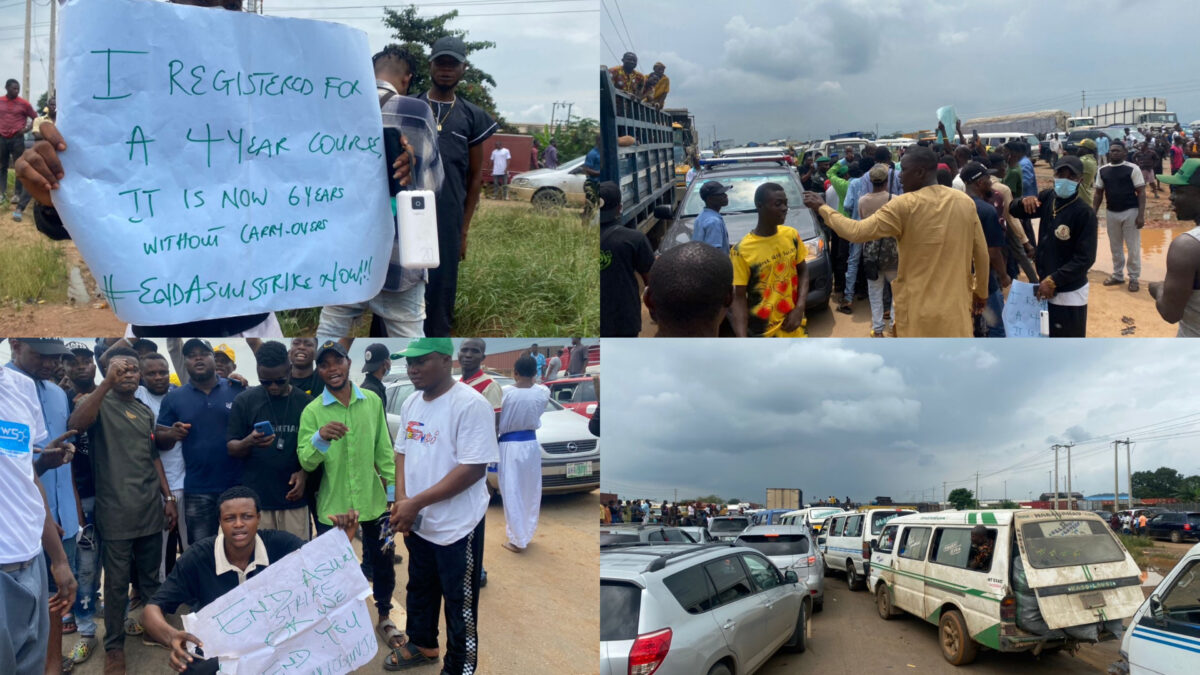 University students on Tuesday blocked the Lagos-Ibadan expressway to protest the ongoing strike by the Academic Staff Union of Universities (ASUU).

The protesters, under the National Association of Nigerian Students (NANS), called for an end to the ongoing tussle between ASUU and the President Muhammadu Buhari regime.

The union members gathered at the Interchange, Sagamu area of Ogun State, at about 7:30 a.m. on Tuesday, displaying different placards.

The union noted that “no higher institution in Nigeria is world class while public servants are spending foreign currency abroad to educate their children.

“We have started a major action today on ASUU Strike. There is no point arguing about who is at fault or what is to be done. It is very clear that the rulers underfund education and the Buhari government is failing in its promises to revamp education.

“As it is today, no higher institution in Nigeria is world class! Yet, our so-called Public Servants travel all over the world spending billions to send their kids abroad for studies,” the statement reads.

The union said its stance with ASUU, saying: “We have monitored the yearnings of students from campus to campus through their social media platforms and also in their public writings. Students all over Nigeria stand with ASUU.”

It added that Nigeria university lecturers alongside students suffer academic hardship due to the lack of equipment.

“Our lecturers suffer the same hardships and mal-developments we suffer. The staff Houses are as bad as the Students Hostels. In South Africa, a Professor Laboratory is far more equipped than that of any university in Nigeria.”

Listing its stance on the ongoing strike, the union said it was standing with ASUU, and called for a meeting with the ASUU leadership to “discuss solidarity actions, and plan for the next phase of the struggles.”

The union passed a no confidence vote on both Ministers of Labour and Education, and called for the proper funding of the educational sector.

The protesting students called on the Buhari regime to pay all outstanding arrears and salaries of the lecturers, saying that the “No Work, No Pay” policy was a Fascist one.

The protesters warned that failure to meet their demands and “We will be mobilising all students to shut down the country (without excluding the Presidential villa).”

ASUU has been on strike since February of this year, over the failure of the Buhari-led regime to meet their demands, with the federal government dragging ASUU to court over the prolonged strike.

On Monday, the National Industrial Court adjourned the case matter until Friday for continuation of the case.