Both opposing groups marched across the road chanting at the top of their voices in a desperate attempt to outshout one another. 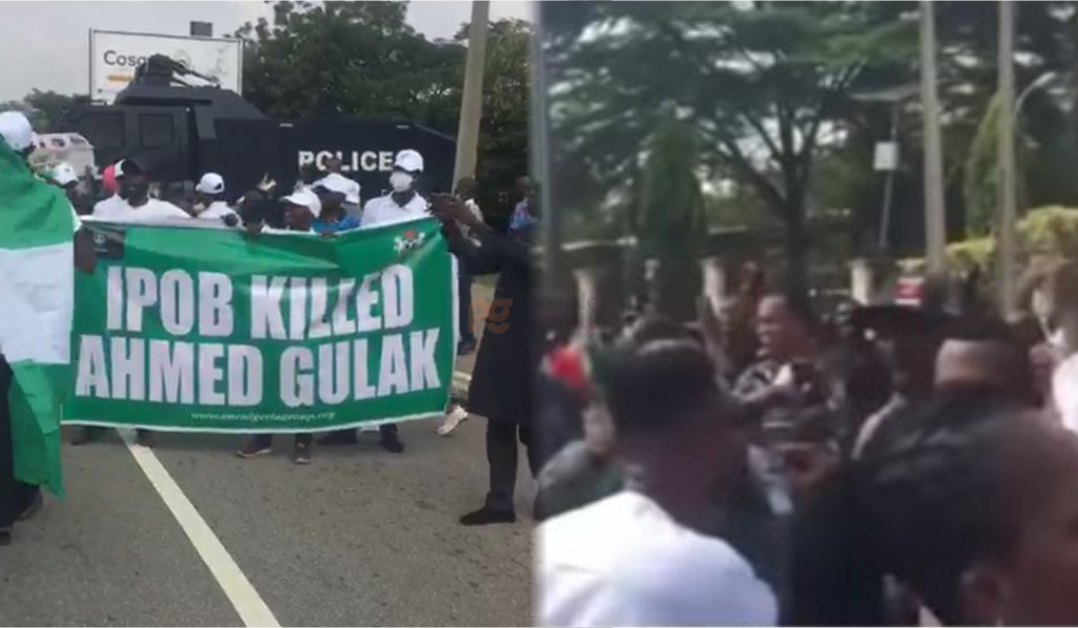 A composite of Pro-government supporters and IPOB used to illustrate the story.

There was a mild drama early Wednesday as members of the Indigenous People of Biafra, IPOB, confronted a pro- government supporters around the Abuja Division of the Federal High Court.

IPOB members had thronged the court in solidarity with their leader Nnamdi Kanu who was in court for the hearing of his suit against the federal government.

On the other hand, another motley crowd, under the aegis of One Nigeria, also gathered at the venue to counter Mr Kanu.

Bearing placards with inscriptions labeling Mr Kanu a “terrorist” and the “Killer of Ahmed Gulak” among others, the pro-Buhari group sought to drown the voices of IPOB group who were chanting their signature “Nnamdi Kanu is another saviour” anthem.

Both opposing groups marched across the road chanting at the top of their voices in a desperate attempt to outshout one another.

The Gazette earlier reported that the trial of the secession agitator had been adjourned to January 19 and 20, 2022, after his team of lawyers walked out of the courtroom to protest the refusal of security operatives who barred Bruce Fein, an American attorney and Mr Kanu’s legal counsel from entering the courtroom.

Mr Kanu who declined to defend himself in the absence of his lawyers prompted the decision of Justice Binta Nyako to adjourn the case to January 2022.

The adjournment has fueled speculation of IPOB supporters who claim the Buhari regime wants to keep Mr Kanu in custody till the expiration of his tenure in 2023.