Although Nigeria is the largest producer of onion in sub-Saharan Africa, investment in the agric sub-sector has been stagnant for years. 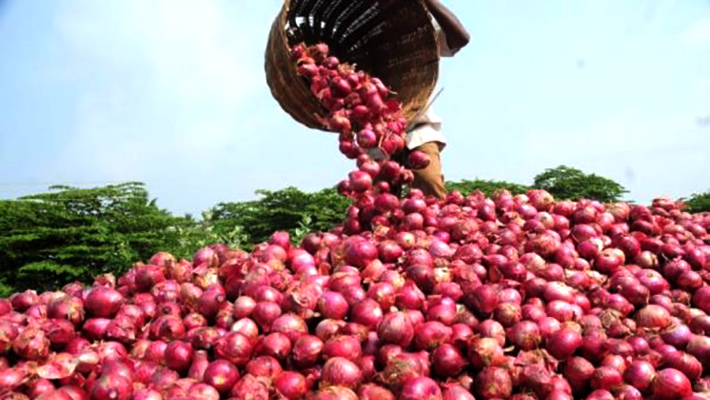 Despite flooding and coronavirus pandemic, onion farmers say the year has not been entirely bad for them.

“From April to August this year, we sold onion worth four billion,” Aliyu Umar, a top onion farmer, said on Tuesday at the planting of high-yield onion seedlings in Tunga, Rabba Local Government Area of Sokoto State. “I want you to know that there is great potential and opportunity in the onion value chain.”

Mr. Umar said the CBN’s anchor borrower scheme has greatly enhanced the fortunes of farmers in Sokoto, but canvassed for more attention around agriculture, NAN reported.

Abdullahi Farouk, a CBN official who attended the programme, said the scheme was designed to transform agricultural potentials for Nigerians.

Mr. Farouk said the planting of new onion seeds was aimed at improving onion production among farming communities by providing them with high yielding seeds and other support.

”We have decided to come here, because Tunga will be the main production centre of seeds, from Kebbi to Sokoto states and even part of Niger Republic,” the official said. ”We are aware that farmers come here to buy seeds, that is why we have chosen this location to breed the seed so that we can share better seeds to our farmers for better yield, and get them out of poverty.”

The CBN official noted that Sokoto was one of the largest onion producers in Nigeria, just as Nigeria was the largest producer of onion in sub Saharan Africa.

Nigeria consumes nearly three million metric tonnes of onions per year, and Mr. Farouk said getting adequate seedlings and investors could help bridge the gap between consumption and production before the country could have a surplus for export.

Although Nigeria is the largest producer of onion in sub-Saharan Africa, investment in the agric sub-sector has been stagnant for years. Experts said corruption and uncertainty in government’s policies have made it difficult for investors to target Nigerian farms for business.

Niger, Ghana, Burkina Faso and Cote d’Ivoire depend on Nigeria for their supply of onions, despite vast potentials for growing the produce.

Onion farmers in Nigeria can exploit the situation in neighbouring countries and bring in more foreign exchange, the official said.