“The appropriate place for them to canvass for the restructuring of any party is Senator Ademola Adeleke’s Ede country home, whom they voted for with flaunted pride.” 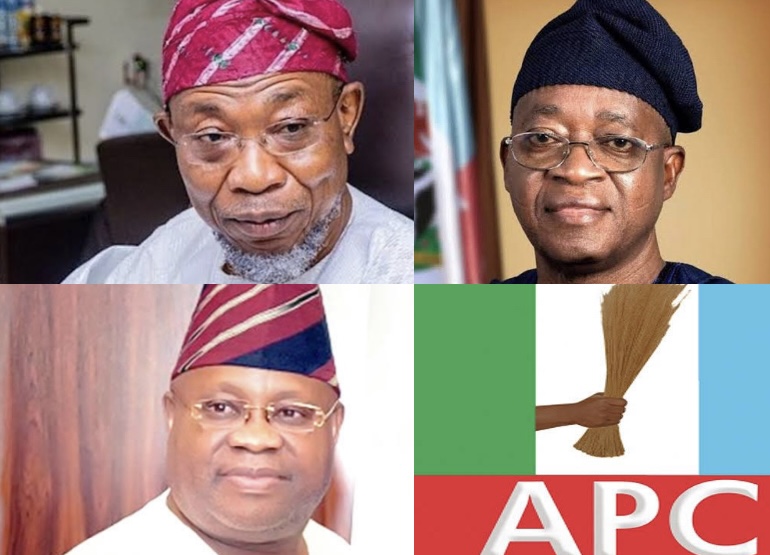 All Progressives Congress (APC) members in Osun under the auspices of the ‘The Osun Progressive’ (TOP), on Tuesday, held a protest in Osogbo, calling for restructuring of the ruling party.

The placard-carrying party members called for the restructuring of APC in Osun following the party’s defeat in the July 16 governorship election.

The placards inscriptions included ‘Osun APC Needs Restructuring’, ‘Famodun Must Go; Save Osun APC from Total Collapse’, ‘Aregbesola is the Soul of APC/Progressive Politics in Osun’.

The protesting APC members also called for the sacking of the party chairman, Gboyega Famodun.

The members, who marched through Odi-Olowo, Olaiya, Ogo-Oluwa protected by armed security operatives, finally made their way to the Osun House of Assembly where they delivered a letter to the speaker, Timothy Owoeye.

The APC group’s youth leader, Abosede Oluwaseun, said the party needed to be restructured from unit, ward, local government and state levels for it to be united and formidable ahead of the 2023 general elections.

“With conscious, sincere and objective analysis of the outcome of the governorship election, we discovered that the electoral loss is not only self-induced by the party’s administrators, it also reflects party issues which had been raised by concerned minds in the recent past,” she stated. “The issues, to summarise them, boil down to glaring mismanagement of the party by Governor Gboyega Oyetola and the party chairman, Gboyega Famodun.”

She accused the chairman of having “totally demonstrated lack of capacity to manage the party and this reflects in the result of the July 16 governorship election.”

As a chairman of a ruling party going for an election, Mr Famodun did not resolve crises that “dotted all the local governments in the state,” noted Ms Oluwaseun.

“Before the governorship election and till now, there is no understanding, cooperation, unity and cohesion in the party,” she added.

Ms Oluwaseun further mentioned that their demand included dissolution of the party executive at all levels in Osun and setting up of an independent caretaker committee to oversee the restructuring of the party among other things.

Mr Owoeye assured them that necessary steps would be taken to ensure the party is united and formidable.

Reacting to the protest, APC chairman in Osun condemned the protest, describing it as shameful, callous and wicked. A statement by his spokemsan Kola Olabisi said the protest was misplaced and inconsiderate.

Mr Famodun alleged that the APC factional members had worked against the success of Mr Oyetola during the gubernatorial election.

“Assuming but not conceding that there are challenges within the party, the protesters should be told that they lack moral right to either suggest or effect any likely solution as it is on record that they massively and collectively worked against Governor Oyetola, the APC governorship candidate, in the just-concluded election in line with the series of their threat,” said the statement.

It added, “One would have thought that the appropriate place for them to canvass for the restructuring of any party is Senator Ademola Adeleke’s Ede country home, whom they voted for with flaunted pride.”