Osun ‘ll be tougher than Ekiti but we’ll do all to win: APC chair Adamu

“No apologies to anybody, we are the party in government, the reality is that Nigerians had chosen the APC and we will do everything we can to retain this position of envy,” he said. 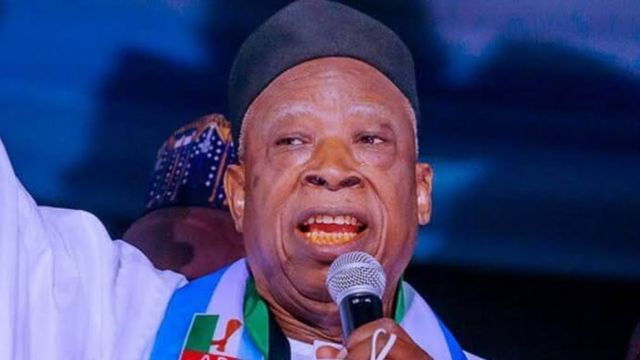 Senator Abdullahi Adamu, the national chairman of the ruling All Progressives Congress (APC) says the party will spare no effort to win the July 16 Osun governorship election.

He said this on Thursday in Abuja when he inaugurated the 86-member APC National Campaign Council for the election.

Mr Adamu said although the election might be a little bit tougher than the Ekiti governorship election, the party was certain of victory in the end.

“No stone must be left unturned, we must do all within the law to win, my tolerance level and that of the party’s National Working Committee (NWC) for failure is zero,” Mr Adamu charged party officials. “Nobody should come back crying, we must win Osun.”

The party leader said that the Ekiti and the Osun governorship election would prepare ground for the party’s victory in the 2023 general elections.

“We have Asiwaju Bola Tinubu as our 2023 presidential candidate, these elections are the first step to 2023, we must start preparing for 2023 now, we must show our capacity,” he said.

Mr Adamu said Nigerians have chosen the APC as their preferred party, hence the need for the leadership of the party to measure up.

“We must show those who love us by showing those who are our adversaries in the strongest possible way that we are in control.

“No apologies to anybody, we are the party in government, the reality is that Nigerians had chosen the APC and we will do everything we can to retain this position of envy,” he said.

He urged the campaign council to show commitment in its assignment.

“We are winning the battle of the states, but the real war to be won is the presidential election in 2023.

“And I do hope that we will not spare efforts to ensure that we come back victorious,” he said.

Governor Abdullahi Ganduje of Kano State and the co-chair of the council, appreciated the APC NWC for the appointment.

He also congratulated the Ekiti State governor-elect Abiodun Oyebanji for his victory at the election.

Mr Ganduje assured of the readiness of the council to work around-the-clock to ensure victory at the Osun election.

“The Peoples Democratic Party (PDP) may have money bags, but we have strategy bags to win the election,” he said.

He said that the council would swing into action immediately with a meeting in Abuja.

The council was headed by Gov. Babajide Sanwo-Olu of Lagos State while other APC governors populate the council.