FIRE has backed Uju Anya, declaring that “freedom of expression does not observe a mourning period.” 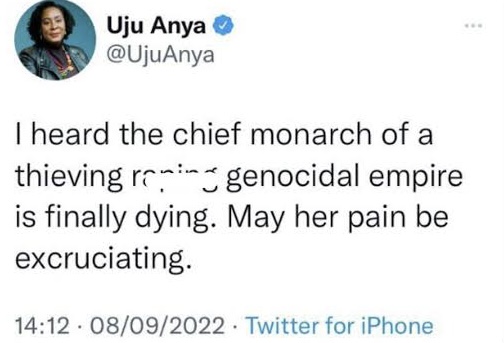 A U.S. group, Foundation for Individual Rights and Expression (FIRE), has warned Carnegie Mellon University not to take disciplinary actions against Uju Anya, a professor in the school’s department of modern languages, for describing the late Queen Elizabeth II as a “wretched woman” and a “genocidal colonizer.”

FIRE, in a letter seen by Peoples Gazette, warned CMU not to cower to external pressure to terminate Ms Anya’s teaching contract, reminding the institution of its “free expression promises.”

On Thursday, public furore trailed Ms Anya’s statement which people offended by it described as hateful and called for head. But FIRE urged CMU to resist public pressure and live up to its commitments “by refusing to investigate or punish Anya for her protected extramural expression.”

“Anya’s employer, Carnegie Mellon University, is also being asked to investigate or punish her. But because the university promises faculty free expression, it must not give in to these demands,” said the statement by Alex Morey, the group’s director of campus rights advocacy. “Free expression includes the right to say you’re happy someone died, or even wish them harm or suffering.”

FIRE further advised the university to uphold its “solid” free expression policies and “simply allow the conversation to continue.”

It also urged Twitter to toe the same path and stop censoring tweets as was done to Ms Anya, whose thread was taken down for violating the microblogging platform’s guidelines.

“I heard the chief monarch of a thieving raping genocidal empire is finally dying. May her pain be excruciating,” Ms Anya tweeted Thursday morning, hours before the queen’s demise.

The professor’s tweet triggered mixed reactions from the public, the majority of whom prevailed on CMU to immediately terminate her teaching contract despite the school’s disclaimer stating that “the views she shared absolutely do not represent the values of the institution.”

Many online commenters asserted the university’s disclaimer alone would not suffice, calling for severe disciplinary measures against the associate professor.

Defending Ms Anya against persons who found the timing of her tweets insensitive, the U.S. rights group asserted that “freedom of expression does not observe a mourning period.”

Editor’s Note: This story has been updated with the correct full name of the U.S. group that opposed any disciplinary measures against Ms Anya.