Mr. Wike has been gifting cars to fat-cat judges and lawmakers, which activists say is at the expense of everyday residents. 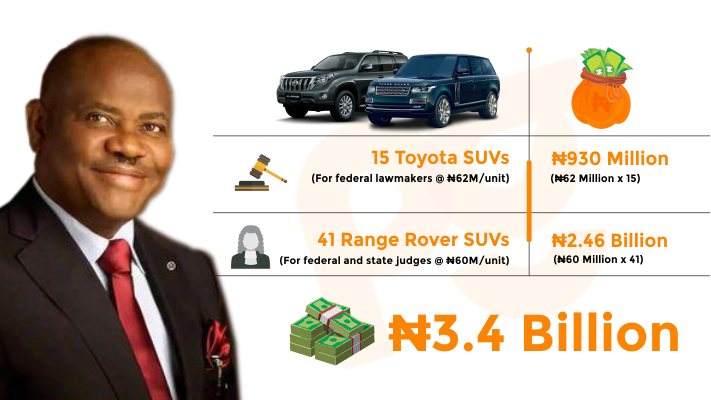 Last night, Governor Nyesom Wike issued an illegal ban on protests across Rivers, defying the Constitution at Section 40, an appellate court judgement that is now statute-barred and state residents.

Mr. Wike said #EndSARS protesters should not proceed on their campaign to end police brutality because the police headquarters had already proscribed the brutal squad.

But the governor ignored the key points of the campaign: a demand for justice for victims, sustainable reform of policing, apology over lethal response from the police, amongst other outstanding issues.

The protesters have vowed to proceed on their campaign in Port-Harcourt, even though Mr. Wike has yet to rescind his illegal order, which could give police undue vigor to intensify their brutal attack on protesters.

But last night’s order, which Mr. Wike later backed down on and showed up at the protest ground in downtown Port-Harcourt, was not the first time Mr. Wike has used his office to advance an end at the expense of state residents.

It is about two months since the governor spent over N3.4 billion purchasing luxury cars for judges and lawmakers in Rivers.

Mr. Wike said the cars would ease transportation for the judges and politicians, most of whom are his long-time associates, but residents say that money could have been used better for the state and its residents.

“The obscene amount that Governor Wike lavished on buying luxury cars for his cronies would have been more impactful on public utilities such as hospitals, schools, roads and job creation,” Bright Abali, a Port-Harcourt resident, said.

In August, even with the coronavirus pandemic and its impact on the economy, the Wike government gifted 15 Toyota Prado VX cars to federal lawmakers in the state. A source in Elizade Motors said the SUVs cost N62 million apiece, totaling N930 million.

In October, Peoples Gazette reported about the government’s failure to pay some retirees despite budgeting for their pay.

Oyigbo is a local community that hosts multinationals such as Shell and is 30 kilometres from the capital Port Harcourt. In 2019, a truck fell in traffic on a bad road there and killed two people.

“Instead of buying such expensive cars for judges and lawmakers, the governor should have fixed the bad roads in Oyigbo,” said Ejike Dike, an Oyigbo youth leader.

Oyigbo youth have often protested against bad roads and unemployment.

Eugene Abel, a senior executive of nonprofit Extra Steps Initiative said the car money could have been used to reduce the state’s debt stock.

“If the state has savings, the monies borrowed would have been taken from it,” Mr. Abel said. “The purchase of cars should not be the priority of the state government.”

This story is supported by the U.S. Embassy through the ATUPA Fellowship from CIVIC HIVE.