Rudolf Okonkwo: From Osinbajo to Malami: The curse of Nigeria’s attorneys-general

A good attorney-general must not be beholden to the executive if there is any hope of enforcing the tenets of the law. 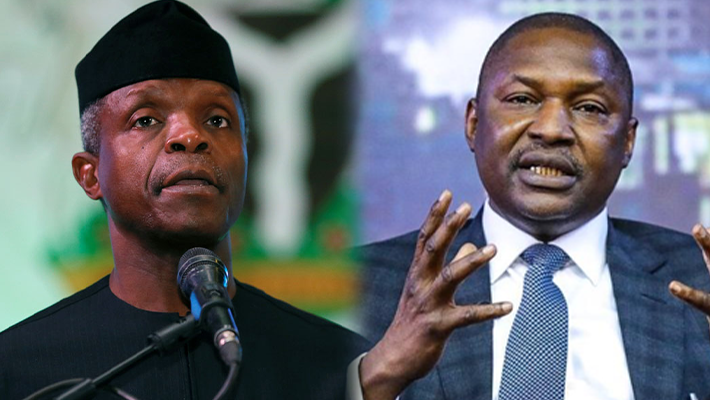 On October 20, 1973, the U.S. President, Richard Nixon, ordered U.S. Attorney-General Elliot Richardson to fire Special Prosecutor, Archibald Cox, who was looking into the charges of corruption against people closely associated with the president.

And just like Richardson, he resigned on the spot. President Nixon then summoned the next most senior official at the U.S. Justice Department, Solicitor-General Robert Bork. The White House used a limousine to bring Bork in for his swearing-in as acting Attorney-General. After his swearing-in, Nixon asked Bork to fire Cox. And Bork did.

In a statement issued that night through his deputy fired Special Prosecutor Cox stated: “Whether ours shall continue to be a government of laws and not of men is now for Congress and ultimately the American people to decide.”

In U.S. presidential history, this incident is called the Saturday Night Massacre. The reaction of the American people to the event of the night was one of disgust at President Nixon’s abuse of power. Ten days after, the U.S. Congress initiated the impeachment of President Richard Nixon.

As I recalled these events, I thought about Nigeria’s Attorney-General, Abubakar Malami, President Muhammadu Buhari, the events that led to the removal of the former Chairman of EFCC, Ibrahim Magu, and all the recent interventions of Malami in Nigeria’s political life. I also thought about Prof. Yemi Osinbajo, the Attorney-General of Lagos under Governor Bola Tinubu, and the events he chaired that led to Alpha Beta Consulting LLP getting approved to collect 10 per cent commission from billions of Naira it collects in internally generated revenue for the Lagos State government. It is a deal that is costing Lagos State billions a month and is still not transparent decades after.

For an easier correlation here is a little more background to the Nixon event. In 1973, the U.S. House Judicial Committee summoned Attorney-General Richardson to explain what he would do to investigate the break-in at the Democratic National Committee’s offices at the Watergate Hotel in Washington, DC, on June 17, 1972. In his appearance before the committee, Richardson promised to appoint a Special Prosecutor, who would work under the attorney-general’s authority. That means only the attorney-general could fire the special prosecutor, and that could happen only for gross improprieties or malfeasance in office.

In May, Richardson appointed an American law professor, Archibald Cox, a special prosecutor. In the cause of doing his job, Special Prosecutor Cox issued a subpoena to Nixon, asking the president to provide copies of Oval Office taped conversations. The president refused. Nixon’s compromise was an offer to allow a hard-of-hearing Senator John Stennis of Mississippi to review the tapes and give the Special Prosecutor a summary of what they contained. Cox’s rejection of this compromise made President Nixon ask Attorney-General Richardson to remove him from office. Richardson rebuffed the president.

Nixon turned to Robert Bork. For doing his bidding, President Nixon promised Bork the next available seat on the U.S. Supreme Court. Unfortunately, Nixon resigned before he could nominate Bork to the U.S. Supreme Court. But in 1987, President Ronald Reagan nominated Bork, then a judge on the U.S. Court of Appeals for the District of Columbia Circuit, to succeed the retiring Justice Lewis F. Powell Jr. The U.S. Senate rejected Bork’s nomination by the largest margin in 142 years, partly for his role in the firing of Watergate’s Special Prosecutor Cox.

As a result of the debacle that was Watergate, the U.S. Congress passed the 1978 Ethics in Government Act that sought to “effect certain reorganisations of the Federal Government and to preserve and promote the integrity of public officials and institutions.” The act also established the U.S. Office of Independent Counsel responsible for the investigation of government officials. The Act expired in 1999 but not before putting several presidents under the heat. President Ronald Reagan felt it in the Iran-Contra affair while President Bill Clinton was under the heat in the Whitewater-Lewinsky Scandal.

To keep holding government officials accountable in the U.S., a replacement of the U.S. Office of Independent Counsel called the Special Counsel regulation had been in use. The most recent one being Special Counsel Robert Mueller, who investigated Russian interference in the 2016 U.S. presidential election. During that investigation, the U.S. got very close to another Saturday Night Massacre under President Trump when the president fired the U.S. Attorney-General, Jeff Sessions, in 2019 and appointed William Barr as a replacement. That action from Trump made the hair on the heads of even Republicans stand up. They remembered the Saturday Night Massacre. And watching how William Barr worked to protect the president instead of the American people, so many Republicans vowed to oppose the return of Trump for a second term in office.

The events in the last few weeks have shown that Nigeria has a terrible attorney-general. On the one hand, Attorney-General Abubakar Malami denies that he did not issue a secret memo asking President Buhari to suspend the Nigerian Constitution and declare martial law. On the other hand, he attributes Nigeria’s problems to Buhari’s ‘religious adherence to the rule of law as enshrined in the Constitution.’

Malami recently told NTA, “Perhaps what we are witnessing today in terms of impunity, the insurgency could equally be attributed in one way or another to a religious submission to the rule of law by the government.” Malami is a man who had not recovered from the embarrassment he made of himself and his office when he declared the southern governors’ decision to ban open grazing unconstitutional.

It is not any better at the state level. State governors abuse their offices, corner state resources for themselves, and swim in conflicts of interest with the active connivance of their attorneys-general. That Lagos State is in Bola Tinubu’s bondage today is due to the work that Professor Yemi Osinbajo did for Bola Tinubu as a member of his cabinet and his attorney-general from 1999 to 2007. Osinbajo’s fingerprints are all over legal questions of the Tinubu years that have remained unanswered.

The legacy Osinbajo left in Lagos is being replicated across Nigeria. With weak and subservient legislatures, state governors have only their attorneys-general to restrain their worst instincts. These attorneys-general are the only levees holding the dams called governors and presidents from busting and flooding the land with abuses and gross malfeasance.