Osinbajo feeds into a fundamental fallacy where the opposite is actually true. 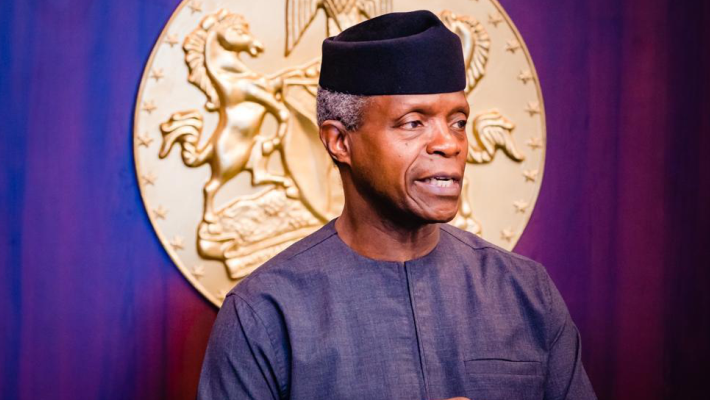 If there is one thing Vice-President Yemi Osinbajo is a master at, it is projecting an optimistic outlook even as Nigeria dances at the precipice. Dead bodies could be pilling up and the doors of national morgues filled to capacity, Osinbajo would be spewing songs of lazy butterflies loitering around at Paradise’s rose garden.

For as long as anyone can remember, every headline with Osinbajo’s name on it portrays Nigeria as a resurgent country about to break its chains of underdevelopment and underperformance. Sometimes, he throws in a fervent religious fatalism mixed with unchecked optimism that leaves any deep observer scratching their heads. Here are just three recent examples of Osinbajo’s signature headline.

1. Vice President Yemi Osinbajo says ‘God is about to give Nigeria a new beginning’

2. Osinbajo to Nigeria’s Elites: Speak up to preserve country’s unity

Typically, Osinbajo’s discourse of Nigeria deliberately does one of three things: ignores or minimises, or obfuscates the premise of the argument.

And as Peter Obi once said, when the premise of an argument is wrong, the conclusion is also wrong. What is not clear is whether Osinbajo is fully aware of the unsustainability of the Nigerian structure and experiment but is just playing politics, or whether he is always in a Pentecostal spiritual zone, where he believes that if only we hand Nigeria over to him, he will summon God to transform the country. For one, we know that his blowing of the vuvuzela of optimism in the last six years has not brought about a “kinder and gentler nation.” It also has not recruited an army of believers, either.

Considering how he was comfortable being an integral part of the unethical Bola Tinubu administration in Lagos, it is hard to divorce his motivation from possibly being a cold political calculation that sacrifices the welfare of the people in exchange for anything that will further his political career. This is very common in our political landscape.

In the same week that Professor Wole Soyinka essentially called President Buhari delusional and begged the international community to declare parts of Nigeria a protectorate, beyond the reach of Buhari archaic madness, Professor Osinbajo was busy painting a different picture of a rosy Nigeria. To Osinbajo, Nigeria is merely facing challenges common with other developing nations and would overcome these challenges if we work hard and keep the faith.

Osinbajo’s school of thought is very appealing to those who could not fathom an alternative reality in a country where the forces of destruction have gotten the upper hand. In a country that is one crisis away from a genocide that would make what happened in Rwanda a child’s play, Osinbajo is at home selling hope even on the eve of the abyss. Osinbajo’s unbridle optimism is based on a false premise that what ails Nigeria is nothing major but a routine disturbance requiring minor adjustment.

Yet, in the last six years, he has been part of a government that has dug deeper, the grave of the country by ‘putting a knife in the little things that once held the country together.’ While many feel it is foolhardy handing such a country to Osinbajo, he gives out the body language that he has the magic wand to reverse the trajectory of a country that has probably passed the point of no return.

Some would say someone has to be optimistic. Some argue that in the face of mounting tribulations, someone keeping hope alive is a warrior to be encouraged.

Emitting hopes devoid of honesty is not a brave position to take. It is actually the safest corner of Nigeria’s erratically swinging pendulum to perch. But there are serious dangers in romancing Osinbajo’s unchecked optimism. Here are the top ten dangers of Osinbajo’s unimpeded optimism.

10: By taking a superficial posture that does not acknowledge that Nigeria as currently structured is fundamentally flawed and would need a major surgical operation to survive, Osinbajo is giving comfort to those enemies of Nigeria who masquerade as patriots. These are people like Ibrahim Babangida, Olusegun Obasanjo, Yakubu Gowon, who preach that certain questions about Nigeria are settled and that the basis of Nigeria’s unity is non-negotiable. Osinbajo is not a doctor preparing a cancer patient for his treatment options. He is rather a faith healer making incantations and burning candles in the basement of a church while the patient’s cancer metastasises.

9. By deemphasising the difficult task needed to get Nigeria working again and defaulting to prosperity preaching mantra of God fixing things for us, Osinbajo is undermining those working hard to educate Nigerians of the sacrifices and prices to be paid if there would be any chance of reviving the critically ill nation. In a time of great moral quagmire, the patriots are the scorned fellows who risk everything to alert the nation of the worst outcomes while showing the path to the best possible outcomes.

8. By subscribing to Babangida/Buhari smokescreen postulations that the masses live in divine harmony across Nigeria and that the problem is with the rancorous elite and their divisive rhetoric, Osinbajo feeds into a fundamental fallacy where the opposite is actually true.

The elite, like Osinbajo and his friends at Buhari’s son’s wedding, are getting along well, sharing the commonwealth while the masses are under pressure and susceptible to blaming and attacking each other and triggering conflicts of survival at the slightest provocation as a result of the failure of the elite.

7. By wishing away the clear and present danger, Osinbajo is like those who, on the eve of Rwanda’s genocide, were waxing strong about the bright future of Rwanda, criminally oblivious of the signs of impending doom. They are not better than bandits, for they are merchants of infantile patriotism that are merely working for some form of anticipatory payment.

6. By being selective in the truth he advertises, Osinbajo is blindfolding Nigerians, essentially preventing them from taking necessary steps to self-preserve. While other countries have gone through traumas and pains of development and made it, others have also failed. The list of those failed nations is longer than the list of the ones that made it. In fact, one can even say that no matter how successful a nation is, eventually, it will fail. All empires collapse.

The question is how long it will last before it collapses and not whether it will collapse. By cherry-picking the “truth” that favors his favorite hymn, Osinbajo is preparing innocent Nigerians for slaughter on the altar of his dream.

5. By defaulting to the old conventional wisdom that there is no Nigerian exceptionalism, that the dynamics that played out in the old Sudan are the same as the dynamics playing out in today’s Nigeria, Osinbajo closes his eyes to Nigeria’s ‘peculiar mess’ and, in the process exposes trusting Nigerians to real danger. It is a form of idolatry to keep worshipping a nation that is daily killing its children. Patriotism is dragging the nation by the ears until it halts its murderous ways.

4. By repeating the often discredited assertion that forging common identity can be done without causing severe pain and shedding of presumptions of privileges and rights, Osinbajo is failing in his task of preparing the people for some hard bargainings that would ultimately entail deep and transformative compromises that so many Nigerians are not inclined to make. Drawing a purpose for a deeply flawed nation requires honest conversations about sane and insane assumptions and not empty words of inspiration bereft of soul.

3. By defining who we are as a people in the context of a non-existing national cohesion and outlook, Osinbajo signed on to the wretched gang that enjoys mouthing unity without corresponding indexes that indicate an existence of such. Even nations like the United Kingdom that have existed since 1707 are seriously acknowledging the lack of national cohesion and are making frantic efforts to accommodate the differences of its components by giving the Scotts rights to self-determination as an example of a last-minute effort to preserve the nation. But Osinbajo will like to ignore these moves and the degree of changes being implemented to save even a functional nation like the UK.

2. By highlighting intermarriages as the doorstop to looming total chaos and collapse, Osinbajo feigns ignorance of the high number of intermarriages in Rwanda that didn’t do a thing to stop the genocide in that country, which killed over 800,000 people in less than 100 days. The likes of Osinbajo are not doing the people any favour by giving them false hope and denying them the opportunity to reassess their engagements while they still have the chance to avoid being victims of an approaching wreck.

1. By deceiving himself and deceiving unsuspecting Nigerians about the beautiful prospects of the Nigerian project in light of the final, and probably, fetal wound it has suffered in the last six years, Osinbajo joins the despicable lot that history will remember for pursuing their personal ambition at the expense of saving the lives and property of the people wasted each day across Nigeria. Undue sentiment has killed more. Inconvenient truth has saved many.

Clearly, Vice President Yemi Osinbajo swore an oath to protect and defend the defective constitution of Nigeria. Nobody expects him to make pronouncements that are inconsistent with that oath – at least, not when he is running for president. It would require serious acts of courage, integrity, and vision for Osinbajo to tell the whole truth about the dwindling chances of lifting Nigeria off the edge of self-inflicted calamity exacerbated by the Buhari-Osinbajo administration. Having said that, by not telling the whole truth, Osinbajo is either betraying his conscience or betraying the people. Either way, it is the treason of the highest order.

Henry Ward Beecher said that “The fear of doing right is the grand treason in times of danger.” This is a time of grave danger in Nigeria. Osinbajo should do the right thing, if not for his conscience, for the people. Otherwise, on judgment day, the punishment for this kind of betrayal is enormous.

Rudolf Ogoo Okonkwo teaches Contemporary Afrodiasporic Literature at the School of Visual Arts in New York. He is also the host of Dr. Damages Show. His latest book is “The Secret Letters of President Donald J. Trump, aged 73.”