The lawmakers said urgent attention was needed to address the high prevalence of neglected tropical diseases in the country. 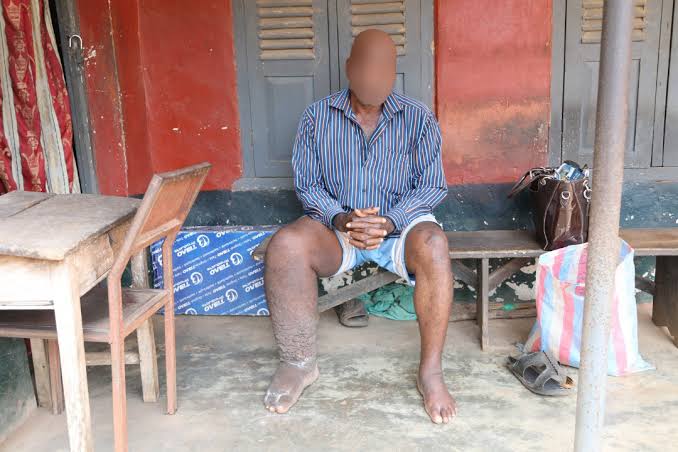 Nigerian with Elephantiasis used to illustrate the story [Photo credit: WHO]

The Senate on Tuesday urged the federal government to increase its effort at eradicating neglected tropical diseases such as Elephantiasis, River blindness, and others.

Chairman Senate Committee on Health, Ibrahim Yahaya Oloriegbe, made the call at a round-table organised by the Nigeria National Task Team held in Abuja.

The lawmaker said with the high prevalence of NTDs in the country urgent attention was needed from stakeholders to eradicate the diseases.

“It is my hope that my colleagues at the National Assembly will be convinced to include the elimination of NTDs to the list of their constituency projects.

“This will go a long way at alleviating the sufferings of Nigerians afflicted by the diseases in one way or the other,” he said.

Similarly, Senator Oluremi Tinubu said that awareness was key for the campaign in the eradication of the diseases.

For Chairman, Senate Committee on Water Resources, Bello Mandiya, water and sanitation were critical in preventing and eliminating the diseases.

Minister of State for Health Olorunnibe Mamora in his submissions, said Nigeria ranked either first or second globally in the prevalence of the diseases aside Malaria which was a massive killer in the country.

He explained that government alone could not do it all as corporate organisations needed to join in the campaign of eliminating the diseases largely domiciled in rural areas.

“Rural dwellers too need to help government in getting rid of the killer diseases by being hygienic as regards water they drink and how they empty their bowels as far as defecation is concerned,” he said.