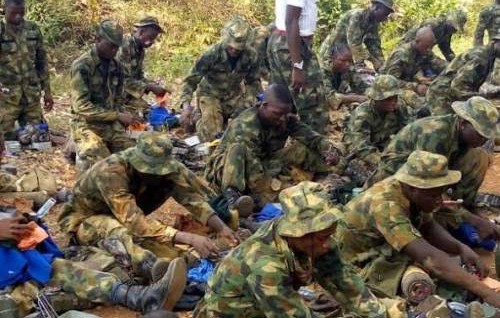 Mr Buhari, a former soldier and dictator, admitting that numerous soldiers face depression, pointing out that battle-weary combatants are grappling with “battle fatigue.”

Last March, the National Leader of Mr Buhari’s party, Bola Tinubu, had urged Mr Buhari to authorise immediate recruitment of up to 50 million young Nigerians into the Nigerian Army, saying such action would overwhelm the ragtag groups of insurgents and bandits terrorising the country across multiple flanks.

On Thursday, Mr Buhari indicated that he had found a solution to the problem, as he revealed during his visit to Boko Haram-ravaged Borno in the North-East that he had ordered the rotation of soldiers in the front line to reduce their battle fatigue.

Visiting troops in Operation HADIN KAI at the Maimalari Cantonment on Thursday, Mr Buhari said his government was committed to the welfare of troops in the front line.

“In addition, your welfare is of utmost importance and concern to this government. I am glad that the gradual rotation of the troops in the field has commenced, as I directed,” Garba Shehu, a media aide, quoted Mr Buhari to have said.

Mr Buhari added, “I am sure that this will minimise and possibly eliminate battle fatigue, as well as enhance troops’ morale.”

According to medicinenet.com, battle fatigue is post-traumatic stress; a psychological disorder that develops in some individuals who have had major traumatic experiences (and, for example, have been in a serious accident or through a war).

The person is typically numb at first but later has symptoms including depression, excessive irritability, guilt (for having survived while others died), recurrent nightmares, flashbacks to the traumatic scene, and overreaction to sudden noises.

In March, Peoples Gazette reported that the army declared at least 100 soldiers wanted for fleeing from Boko Haram.

With many soldiers maimed and killed by the terrorists, coupled with reports of ill-equipping of the troops, Mr Buhari was full of praise of the soldiers, assuring them of proper treatment at all times.

“Your courage and gallantry will continue to inspire others as they echo into the future,” he assured the troops. “While I commend your resilience, let me remind you that there is still a lot of work to be done, to completely restore peace to the North-East, stem the activities of armed bandits in the North-West and North-Central, as well as deal with other security challenges across the country.”