Defence Spokesman Bernard Onyeuko gives updates on military operations around the North in the past two weeks. 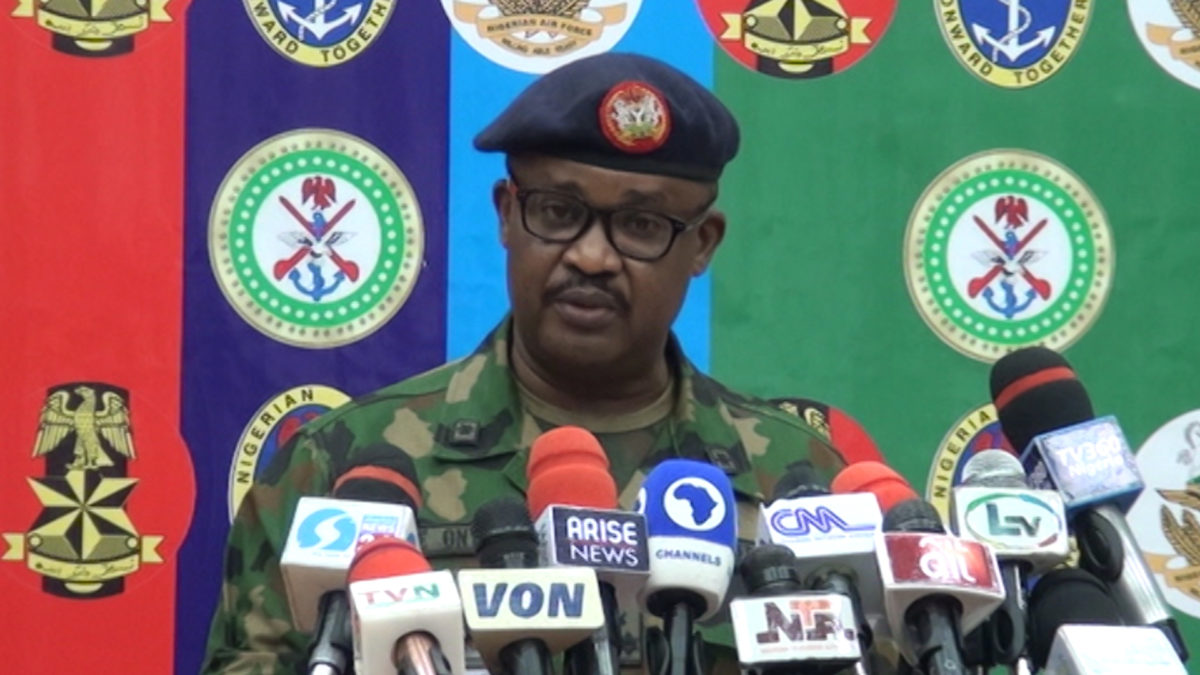 The Defence Headquarters (DHQ) said no fewer than 1,000 terrorists and their families have surrendered to the firepower of the troops of Operation Hadin Kai, in the North-East theatre of operations.

DHQ also disclosed that a total of 27 Boko Haram/Islamic States West Africa Province (ISWAP) terrorists were killed while no fewer than 51 were arrested in the last two weeks.

The Acting Director, Defence Information, Brigadier-General Bernard Onyeuko, disclosed this while giving updates on the operations of the military across the country on Thursday, in Abuja.

Mr Onyeuko added that three terrorists’ collaborators were also apprehended, as well as the rescue of 29 abducted civilians during the period.

According to him, the intensity of operations by the troops has yielded tremendous results as evidenced in the number of casualties and massive surrender of terrorists across the theatre.

“Cumulatively, the operations led to the neutralisation of 27 BHT/ISWAP fighters, arrest of 51 BHT/ISWAP terrorists, three terrorists’ collaborators, as well as recovery of 35 assorted arms.

“In addition, 29 abducted civilians were rescued within the period under review. Gentlemen no fewer than 1,000 terrorists and their families, including adult females and children surrendered to our troops at different locations in the North-East.

“Notable among them are the notorious BHT bomb expert, Musa Adamu a.k.a Mala Musa Abuja and his deputy, Usman Adamu a.k.a Abu Darda.

“This has in no small measure depleted the Boko Haram fighting force,” he said.

In the North-West, Mr Onyeuko said the troops of Operation Hadarin Daji, had on July 31 repelled bandits, rescued some kidnapped victims, as well as recovered arms, ammunition and some livestock, while some criminal elements were also arrested.

He said that a total of 89 livestock, five AK-47 rifles, three rounds of 9mm ball, and 48 rounds of 7.62mm NATO ammunition, were recovered, and four kidnap victims rescued.

He added that two notorious cattle rustlers named, Mallam Umar from Niger Republic and Mai Hatsi Ibrahim from Gada in Sokoto State, as well as four bandits and drug peddlers were apprehended.

According to him, the Air Component destroyed bandits’ structures, including the residence of one of their leaders, Halilu Tubali, in which the bandits converged for a meeting.

He added that the air strikes, in conjunction with ground troops’ assaults, resulted in the neutralisation of no fewer than 123 armed bandits and destruction of their logistics facilities in the process.

In the North-Central, Mr Onyeuko said the troops of Operation Safe Haven had continued to record tremendous successes in both kinetic and non-kinetic operations across the theatre in Plateau.

He said the troops of Operation Whirl Stroke also destroyed bandits’ hideouts and arrested eight criminals, including their informants; and further rescued some kidnap victims in parts of Benue and Taraba.