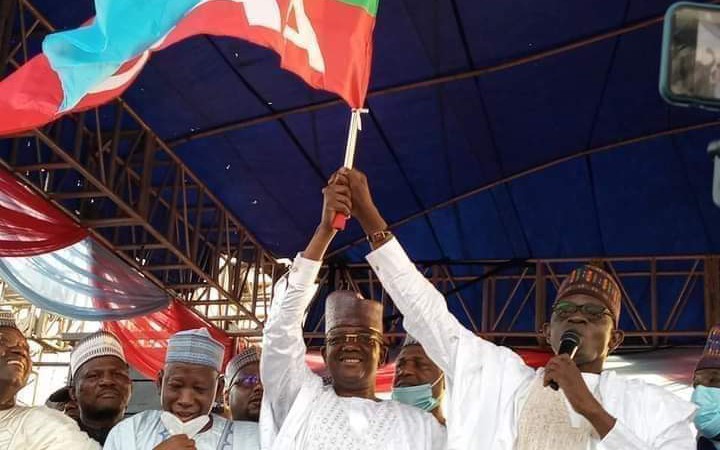 Mr Buni announced this on Tuesday, saying it is in line with the party’s constitution while handing over the party’s flag to Mr Matawalle.

The Zamfara governor formally defected to the APC from the PDP on Tuesday at a rally in Gusau.

Before Mr Matawalle’s defection, ex-Zamfara governor Abdulaziz Yari was the party’s leader in the state.

“This is as provided by our party’s constitution, and so l am mandated to inform you that as from today, Governor Bello Matawalle is the leader of the APC in the state.

“Similarly, all leadership structures of the party in the state have been dissolved while the new party leader and governor of the state will announce new leadership of the party at all levels,” stated Mr Buni.

During the event, Mr Matawalle announced his exit from the PDP, citing the failure of the party to provide an acceptable platform of moving Zamfara and the nation forward, among his reasons.

The governor defected to the APC along with three serving senators from the state and six out of the seven House of Representatives lawmakers.

The event was attended by the Secretary to the Government of the Federation, Boss Mustapha, ministers of the Environment Muhammad Mahmoud and Humanitarian Affairs Sadiya Umar Farouq.