Buhari regime to implement ‘no work, no pay’ for striking doctors: Report

The ‘no work, no pay’ policy is expected to take effect from Monday August 2, 2021 when the strike was commenced by resident doctors. 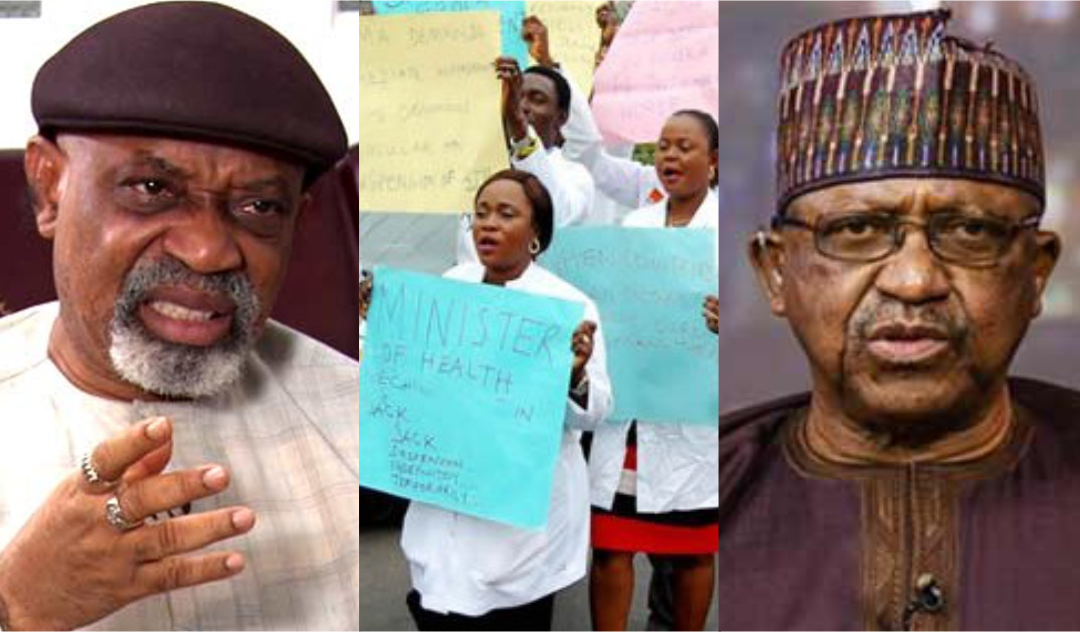 The regime invoked Section 43 (i) and (a) of the Trade Dispute Act on special provision for payment of wages during strikes and lock-outs according to a document obtained by the International Center for Investigative Reporting (ICIR).

The report disclosed that the memo emanated from the Chris Ngige-led Ministry of Labour and Employment, informing the Ministry of Health to employ the “no work, no pay” policy to address ongoing strike by the Nigerian Association of Resident Doctors (NARD).

The health ministry said it was in receipt of a letter from Mr Ngige informing it of the laws governing the ongoing strike by NARD and the need for it to “Immediately” apply the provision of the section 43 (i) and (a) of the Trade Dispute Act.

It stated that this part of the Act deals on “‘Special provision with respect to payment of wages during strikes and lock-outs’ known in labour parlance as “No work, No pay” with effect from Monday August 2, 2021 when the strike was commenced by NARD members.”

The memo from the labour and employment ministry to its health counterpart instructed that, “Consequent on the above, I am directed to inform you to commence the implementation of the ‘No Work, No Pay’ policy on striking doctors with effect from Monday August 2 2021 including other health workers that may embark on strike subsequently.”

Resident doctors had resumed the strike they earlier suspended after 10 days in April to give the government more time to respond to their agitations.

Amongst other issues, the striking doctors are asking for a reversal of the exclusion of house officers from the scheme of service which was a major subject of the memorandum of understanding signed by the duo parties well over hundred days before the strike.

Other demands by doctors include recruitment of more doctors by the government to ease workload in hospitals, an increase in hazard allowance for doctors beyond N5,000.

The striking doctors are also asking for the payment of unpaid salary by states and the federal government, and also payment of the National Minimum Wage consequential adjustment to some doctors by the government.

Mr Ngige has repeatedly made comments considered offensive about the crises in the medical sector, especially on the issue of brain drain plaguing the sector.

Nigerian medical professionals have been on a desperate bid to leave the country due to years of incessant strikes over low remuneration and poor welfare. Many of the doctors have over the years moved to Europe, Canada, and most recently to Saudi Arabia, where they hoped to get better training and general working conditions.

The Buhari-led regime feels embarrassed that doctors are leaving the country in their multitude for better work climates. Recently, doctors in Nigeria attending a job interview organised by the Saudi Arabia government in Abuja on Thursday, were forcefully dispersed by operatives of the State Security Service (SSS) in front of the Sheraton Hotel.