Though called a rubber stamp, the Nigerian Senate will not pick a fight with President Muhammadu Buhari, says Orji Kalu. 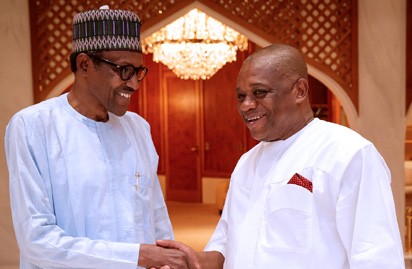 Though called a rubber stamp, the Nigerian Senate will not pick a fight with President Muhammadu Buhari, says Orji Kalu.

He stated this on Tuesday at the National Assembly.

“The Senate is not a rubber stamp, it is just that we have done things differently. There are many things the Presidency has sent to the Senate that we rejected, and we reject it at the level of leadership and send it back to him,” said Mr Kalu. “There is no need to fight with the President because our job is to complement the efforts of the executive, to give them the chance to give Nigerians good governance.”

According to him, the Senate’s duty “is not to fight.”

But, he noted, “if we want to fight, we join the Nigerian Army and carry the gun to fight.”

He explained that the senators’ duty “is to make laws and ensure we stabilise the polity by ensuring there is a good relationship between the judiciary, executive and the legislature.”

Mr Kalu claimed that the Senate “has been very successful in bringing the budget before December each year.”

The chief whip added, “This is the job of the legislature. We don’t want to enter into unnecessary controversies with the executive. We have fought many times with the executive, but quietly. People can call us any name. But I can speak out my mind to say we are not rubber stamp(s).”

A former governor of Abia, Mr Kalu, further stated that there was cooperation in the Senate.

“This Senate is very cooperative, and we are one family. Since I joined politics, I have never seen a family like the Senate. The Senate is one united family, and I can testify to that,” he stated. “When I had my problem in prison, a lot of my colleagues, including the Senate leadership, showed a lot of compassion towards me. Every other senator tried, but senators Sani Musa, Kashim Shettima, and Ibikunle Amosun were exceptional.”