The farmers said that they were pleading with the state government to allow them to acquire the land instead of imposing foreigners on the indigenes. 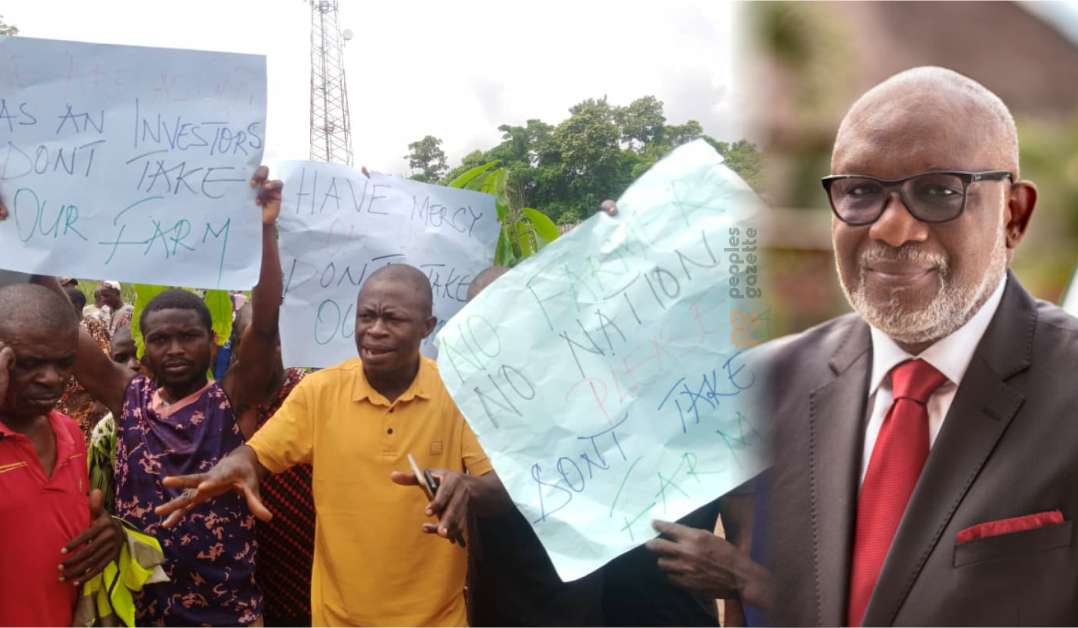 Cocoa farmers in Ofosu, Idanre Local Government Area of Ondo, on Monday, protested against alleged sale of their farmland to a Chinese company by the state government.

Some read: “Respect Our Right to Livelihood’’, “Don’t Give Our Land to Mindless Capitalists’’ and “We Want to Remain Farmers and not Armed Robbers’’.

Speaking with journalists during the protest, a community leader, Kazeem Akinrimisi, the Sasere of Ofosu, noted that he had been farming on the land for more than 20 years.

He said more than 25,000 farmers registered by the state government had been paying their dues to the government.

Mr Akinrimisi said he paid N6 million as dues for farming on the land to the state government in 2021 and pleaded that government should allow the farmers to acquire the land instead of imposing foreigners on the indigenes.

According to him, the farmers occupy 74 camps in the community spread over 20,000 acres of land.

An octogenarian, Ezekiel Olatunji, in his reaction enjoined government to consider the lands as the farmers’ means of livelihood.

Mr Olatunji said that he had been farming on the land for more than 20 years and that he paid N1.2 million as his due to the state government in 2021.

He stated that he was surprised that government decided to sell the land to foreigners, saying that cocoa is a major foreign exchange earner for Nigeria.

The octogenarian asked Gov. Oluwarotimi Akeredolu to allow the farmers to be paying their dues, saying that they could even pay more if desired by the government.

In a similar vein, Samuel Awolola, who said that he had been on the land for 27 years, asked government to show mercy to the farmers since they were willing to pay their dues.

He said that Obada Camp in the community where he belonged paid N9 million out of N10 million as farming dues to government in 2021.

In her protest, Georginah Ose, said that taking the land away from the farmers could increase crime in the society, saying that more than 25,000 farmers would be rendered jobless.

Oba Henry Olumakaye, the Olu of Ofosu, appealed to the farmers to be calm and avoid violence.

The traditional ruler asked the farmers to be peaceful, promising that the palace would hold a meeting with the state government on Tuesday.

Calls put across to Akin Olotu, Special Adviser to the governor on Agriculture and Agribusiness went unanswered just as he did not respond to text messages.