Electricity, fuel pump hikes, crippling loans, worsening attacks on human rights as some of the notable ills they are campaigning against. 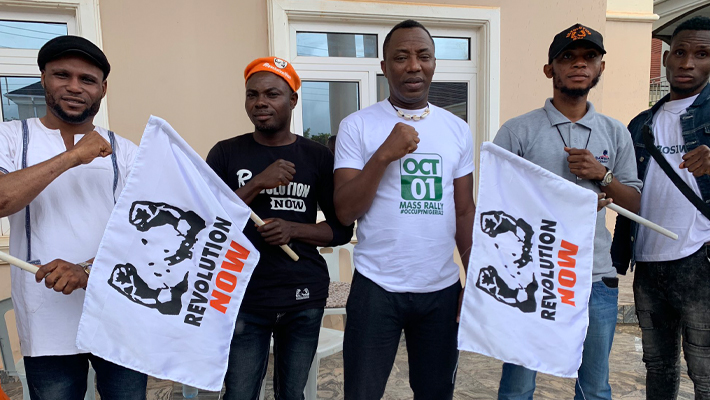 Nigerians will be taking to the streets on October 1 to protest economic hardship, ethnic strife, government inefficiency and a host of other protracted crises besetting the country.

A coalition of civil society organisations has vowed to lead the demonstration across all Nigerian states and some foreign cities, organisers said.

Nigeria marks this year’s Independence Day together with her 60th Independence Anniversary, and protest organisers say the day was deliberately chosen for that significance.

Yele Sowore, a leader of #RevolutionNow, said in a statement to Peoples Gazette that Nigerians would vent their anger against unbearable conditions they have been living through.

“The Coalition for Revolution is calling on all Nigerians at home and in the diaspora to come out en masse on October 1 and participate in a massive peaceful protest to demand the reversal of anti-people policies implemented by the President Muhammadu Buhari-led administration,” the statement said. “These harsh policies that have bored a burdensome hole into the pockets of the Nigerian people are coming at a time when citizens are recovering from the adverse effect of the COVID-19 pandemic, a global health crisis that was also mismanaged by the Buhari’s government further plunging already struggling citizens into deeper financial problems.”

The protest organisers specifically listed recent hike in electricity tariff, fuel pump price, crippling loans, worsening attacks on human rights as some of the notable ills they are campaigning against.

Another rights activist coordinating the protest, Raphael Adebayo of the Centre for Liberty, told the Gazette Wednesday morning that the protest would go on as planned, notwithstanding the response security agencies are planning.

There are already reporters that the police and other security agencies might disrupt the protest and create chaos, but an advisory has already gone out that could help ensure safety of participants.

“All protesters are expected to wear light-sleeved clothing (with a touch of orange if possible) jean trousers or at leisure wear, running shoes for ease of movement, water, placards bearing inscription and means of identification,” organisers said.

The protests will take place in all 36 states across Nigeria and in the following cities outside the country.

More locations may be announced before October 1, organisers said..